Guest post by Jürgen Wegner, which first appeared in the Shadowland Newsletter, #71, February 2017.

Australia has quite an extraordinary number of printing museums even though these would be more of the small working demonstration of letterpress printing kind than true museums. But I am sure that if someone created a census of existing printing machinery and equipment here that it would amount to a sizeable national inventory. Perhaps with less diversity than it could have had if, say, material had been collected when our printers were scrapping historic presses left, right and centre. NERAM or the New England Regional Art Museum contains one of our better collections of printing machinery and equipment. Though an art gallery, it has a large section devoted to historic printing machinery and equipment manufactured by F.T. Wimble. This is nice enough to look at despite the items having been restored to within an inch of their (historic) selves. But essentially it was something you stopped off on the way up north rather than a destination in its own right.

With 2017—and I suspect largely due to its new director, Robert Heather—the Museum of Printing at NERAM is working towards becoming a centre for letterpress printing. This month it will be launching the first of a series of exhibitions under the title of The Print Room. While this is somewhat inevitably seen through the lens of art—printing as printmaking or the production of book art—there looks to be a healthy diet of printing as well from the information provided on their website (see below for details):

“The first Print Room exhibition will be New Impressions, an international exhibition from the Hamilton Woodtype and Printing Museum in Two Rivers, Wisconsin (USA), which will open on Friday, 10 February, 2017. This international juried exhibition showcases creativity and exploration of the artform of letterpress printing techniques and features artists from Australia, Europe and America…”.

“The Museum will also be holding a special ‘Wayzgoose’ event in late April for printers, printmakers and print-lovers which will be an opportunity for printmakers and the wider community to celebrate together. The wayzgoose was originally an entertainment given by a master-printer to his workmen… In recent years a number of letterpress and printing studios around the world have been holding Wayzgoose events as a celebration of the printed object”.

“The Print Room opening weekend will feature a one-day workshop (on Saturday, 11 February, 2017) by typographer and educator Clint Harvey who will be sharing his knowledge of letterpress printing using the F.T. Wimble and Co. Wood Type Collection at the Museum of Printing, a rare opportunity to get hands on with one of Australia’s most significant collections of wood type with a leading letterpress practitioner”. 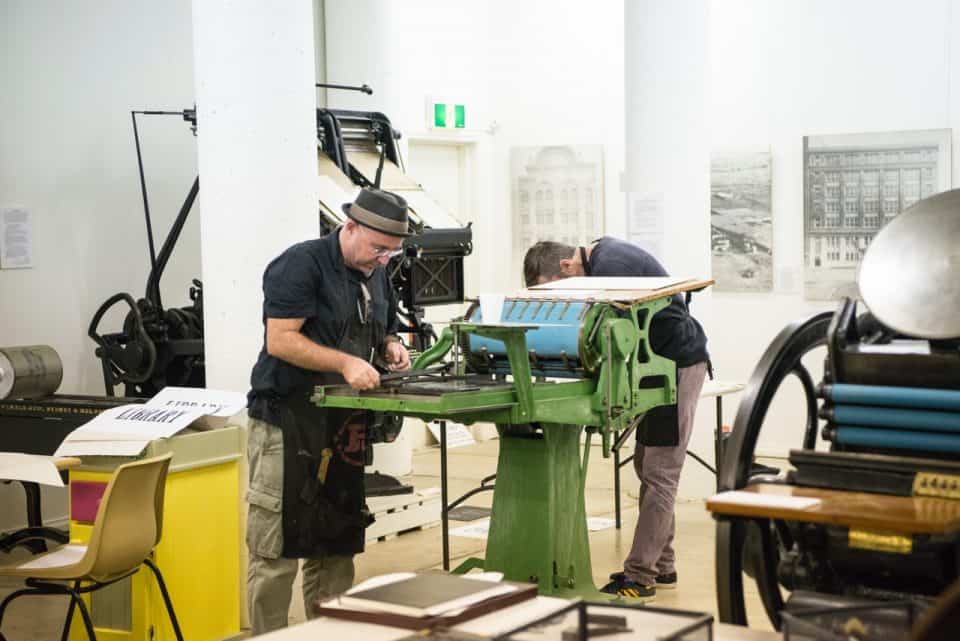 “Designer, educator, curator and artist Clint Harvey has had a twenty year career in commercial design with a focus upon typography. He was the founder of the Design College Australia (DCA) in Fortitude Valley in Brisbane and he has an all consuming passion for the artform of letterpress which he creates at his studio – the Bacon Factory in Brisbane” New impressions of age-old artform.

The NERAM projects are part of a widespread better understanding of the importance of printing to all aspects of society and culture, not just as a way of producing art multiples. Exhibitions such as that from Hamilton and Harvey’s workshop are hopefully the start of a continued presence of letterpress printing and printing history in Armidale.