The life and extraordinary achievements of one Dr.-Ing. Rudolf Hell

Thoughts on one of the foremost inventors in twentieth century printing and on the German association which works to preserve his material and intellectual heritage.

The Journal für Druck- und Mediengeschichte (Ger., Journal of print and media history) is published three times a year as a section in the German printing trades journal, the Deutscher Drucker (Ger., German printer). The Journal is compiled and produced by the Internationaler Arbeitskreis Druck und Mediengeschichte (Ger., International Working Party Print and Media History). And they still continue to send this to me free of charge after all these decades. (Dankeschön)! It is only the briefest of spring cuckoos—far too brief, sadly—but it always contains one or two longer pieces often sourced from recent events, some shorter items as well as notes or mentions of new publications in the subject. The current issue also includes a long article on the life and work of Rudolf Hell by Wilfried Kusterka.

As I am always saying to people, if you are serious about your printing history, you had better start learning German. But only half in jest. So much of our printing history—and printing—originates from the region. As does the voluminous literature on the subject of book and print culture. Kusterka’s article is titled Ich habe Gutenberg ins Handwerk gepfuscht (Ger., I meddled in Gutenberg’s handywork), a comment attributed to Hell himself. Somewhat ironically, for Hell was himself awarded the prestigious Gutenberg Preis in 1977. I think the comment has more to do with the continuity of printing. That printing has always been a dynamic—even revolutionary—technology. And that Gutenberg himself would have approved of the remarkable contributions that Hell made to the printing technology of that most revolutionary of printing centuries, the twentieth century.

Hell was born near Regensburg in Bayern, in 1901. The Drupa blog Pioneers of printing calls him ‘…one of the most important inventors of all times’. In 1919, Hell begins his studies at the Technische Hochschule (Ger., Technical University) in München. There are many avenues open to a young man interested in science and technology but in Hell we have one of those extraordinary thinkers whose ideas were futuristic rather than just career oriented. In his field, he is today regarded as one of the most significant contributors for the twentieth century. He became interested in the work of Max Dieckmann who was experimenting with the concept of wireless broadcasting of images, i.e. television. Hell was inspired to the extent of volunteering to become Dieckmann’s unpaid assistant. His dissertation and first invention is a location device for pilots. And, in 1925, Hell patents his invention for a television tube. This was shortly followed by his invention of the Hellschreiber (Ger., Hell Writer), a machine for the ‘electrical transmission of characters’. A fax machine but also the precursor of modern phototypesetting and all that followed. The invention he very profitably sold to Siemens.

I doubt whether the name of Hell will be familiar to any but a very few readers of this article. First of all, he is neither British nor American. Major figures not from the Anglo sphere tend to be, in the main, the forgotten heroes of our printing history. Those who have heard of Hell would have heard of him because of his Klischograph (1953).

Yesterday’s news is never today’s news. What is required is speed in communication. But in traditional newspaper production, illustrated news articles required the production of blocks which had to be physically manufactured—a time-consuming process. What if images could be transferred electronically and what if these images could then be directly engraved in-house via a platemaking machine. The production of printing plates, or socalled clichés. The Klischograph focussed these ideas into a commercially viable and highly successful piece of printing equipment.

Hell’s life and work was intimately interwoven with the spirit of the age—the spirit of automation and computerization. Offset followed on from letterpress printing. As did photocomposition from the hand or machine composition in metal. Would readers be surprised to learn that already in 1929 Hell had invented a way of transmitting type (characters) electronically, the basis for today’s digital font production—the Hellschreiber? In Paris, at the TPG printing trade fair, Hell talks about and exhibits his HochleistungsLichtsetzmachine (Ger., High speed light composing machine). It is this, the Digiset, which Hell regarded as the disruptor of Gutenberg’s five-hundred-year legacy. 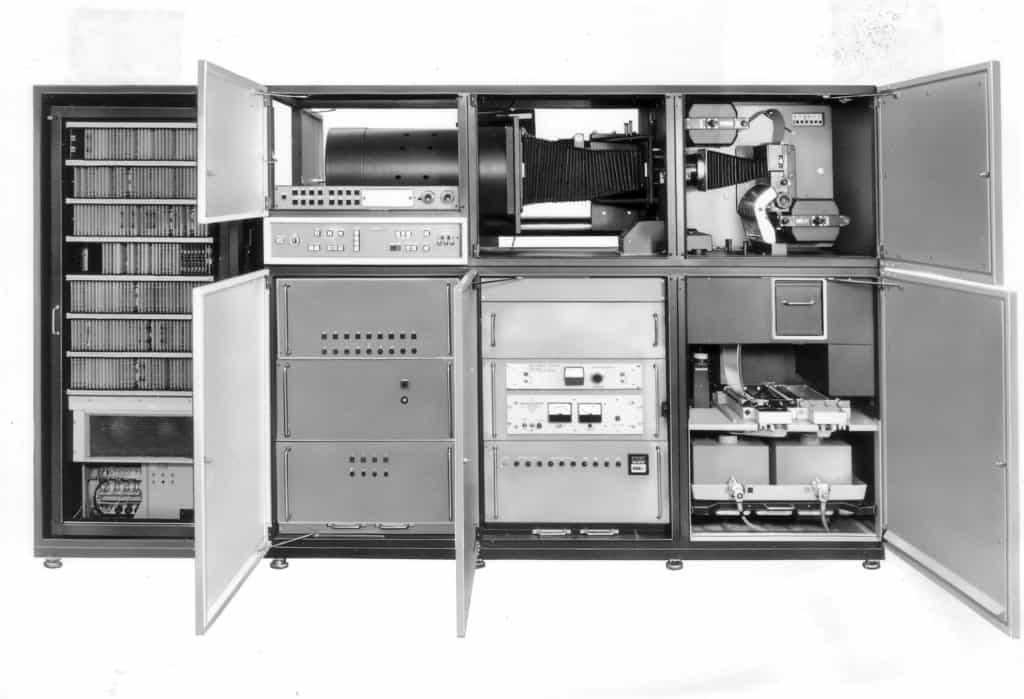 A later model of the Hell Digiset, the first third generation phototypesetter in which the fonts were entirely digitised.

Hell had moved to Kiel in 1947 which is where the company that bears his name still resides. He is if not the most famous then certainly one of Kiel’s most famous sons. There is an association there, the Hell Verein Kiel (Ger., Hell Association Kiel)—or its name in full: Verein der Freunde und Förderer Technische Sammlung Dr.-Ing. Rudolf Hell in Kiel)—which has been working not only to preserve the memory of the great inventor and entrepreneur, Rudolf Hell. (Their website and the page on the Klischograph is well worth exploring. You can even become a member!)

When you look at our printing museums, what you see essentially is an overarching sameness. Just how many letterpress print shops with Linos, Heidelbergs and C&P jobbing platens do we really need? Or their equivalents in other countries. Especially when this means that large parts of our printing history are neglected. Printing history did not stop in 1950. Printing history is as much offset, phototypesetting and digital printing as it is letterpress. The Gutenberg Museum even demonstrates 3D printing at its stand at trade fairs.

The fine printing museum near Kiel—the Druckmuseum Rendsburg— does contain a great deal of material on these subjects. But how much more desirable is a museum if not specifically dedicated to Hell and his inventions, then at least to the more modern aspects of our printing history.