A museum of the photocopier? Outrageous!

When Klaus Urbons first opened his photocopier museum as a private initiative the idea of collecting such everyday material must have seemed pretty outrageous to some. Today it has become an absolute necessity.

I was looking for a date for a printing museum and checked the Association of European Printing Museum’s very useful timeline webpage. It is European though the information it contains is international. Scanning the list of dates of foundation, I was amazed to come across a reference to a Museum für Fotokopie (Ger., Museum of Photocopying). The webpage doesn’t give a great deal of information as it is just a listing. Only that it was incorporated into the Deutsches Technikmuseum (Ger., German Museum of Technology) in Berlin in 1999. Museum für Fotokopie was started as a private initiative by Klaus Urbons and was located in Mühlheim on the Ruhr near Duisburg. Well, museums do incorporate other museums—although the current website indicates that the museum is now again (also?) back in Mühlheim. (‘The museum has moved several times since then. It has grown, parts of the collection have been given to other houses, it has been relocated …’ (website). As libraries occasionally incorporate other smaller library collections. Hopefully as a unit and kept intact because of the contextual significance. The Gutenberg Museum, for example, includes the fine Deutsches Buchbinder Museum (Ger., German Bookbinding Museum), a museum within a museum established in 1962.

The Museum für Fotokopie was a private initiative and at its opening it comprised twenty-two items in a small exhibition space of just fifty-four square metres. The museum project lasted about fifteen years. The collection had by then grown to around one hundred items and, together with archival material and its library, it went to the Deutsches Technikmuseum in Berlin in 1999. The Copymuseum (as it is now called) website is current to March 2020 when a new website was created—honouring the thirty-five year’s history of the M.M.F. Museum für Fotokopie (see below for details). The original website not only provides information but also gives digital copies of its publications like the 80- plus page exhibition catalogue of photocopy art titled Fast, cheap & easy. Also Push and go, on playfulness with the copier. Most of these apart from Fast, cheap & easy seem to have broken links, though.

But a Museum of Photocopying?! Printing history is far more diverse than the story that we are usually presented with. This is also the case for libraries which still see their role as, essentially, a nineteenth century one. The provision of reading ‘books’. When we are really now living in quite a new period of human development. Printing is still everywhere. And printed books are still in abundance. You could even claim in overabundance because modern printing technologies have made the printed book inexpensive to produce as never before. Leading to a proliferation of titles produced in irregular ways. Shouldn’t the story of last-century printing be also documented and told? Where are the museums of small offset? Of phototypesetting? Yes, even museums of digital printing! (I should note that many printing museums do also have a micro collection of typewriters. Why)? As with libraries, we all think alike and so there is a great deal of duplication of effort at the expense of important chapters of untold histories. Very much as for the library world. We could do with a little thinking outside the square. But someone in Germany had this brilliant idea all those years ago. Collecting photocopy technology at the time must have seemed outrageous though this was also not just about office copying but about art. I wonder if there are other interesting niche museums anywhere to be found? Does Gestetner, for example, at its head office, have a small museum of the spirit duplicator? Surely something else that revolutionized the way ‘print’ was produced in its day. 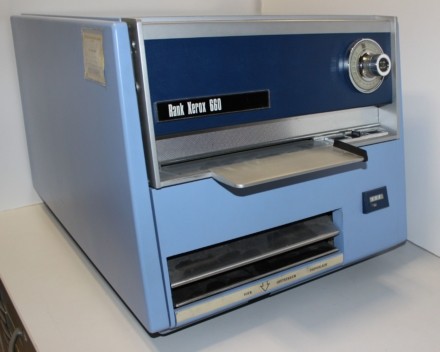