The printing museum in the Benary Speicher, Erfurt

A study in survivals (as D. B.Updike once put it): the collection put together in the 1980s by the staff of the Druckerei Fortschritt (Progress Printery) with the aim of establishing a printing museum to celebrate the hundredth anniversary of the death of Karl Marx is now housed in the local museum of the city of Erfurt. It's well worth visiting.

Anyone who is doing the grand tour of the printing museums of Europe will no doubt just pass by Erfurt on the way to Leipzig and its more famous Museum für Druckkunst Leipzig. This is indeed a wonderful museum and one near the top of any list. And they will probably not be giving Erfurt and its printing museum a second thought. As is the case with me, for over the years I have looked out at the Erfurt Hauptbahnhof from my carriage window as I passed by heading to one destination or another. But Erfurt is a surprisingly interesting place. It is known to Germans, but is it off the map for other visitors? Because of its East German past? 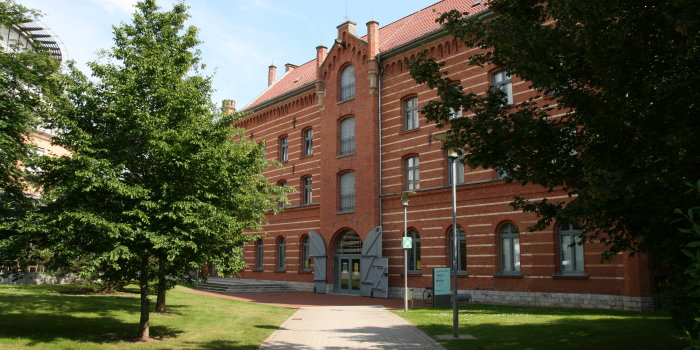 I was surprised by how large the city is… especially as you look out over the city from its vast Petersberg citadel. Though the population is quite small… a little over two hundred thousand. And by how much of its historic centre remains. The name of Erfurt is first mentioned in a letter in 742, and by 802 it was the site of the court of a Pflazgraf (Count Palatine). The university of Erfurt was founded there as early as 1392 and, as I discovered in a pamphlet about the Gutenberg museum in Eltville recently, Gutenberg is believed to have done his magister there! Europe has for centuries been a parade ground for invading armies and Erfurt has not been spared that history. It became Prussian, then French. After the Second World War it was occupied by the Americans, who then handed it over to the Soviets.

The forty years of Communism have left their mark on this fair city though this should not always be assumed to be just totally negative. For example, lack of capital has meant that there is no sky scraper or high-rise office block to be seen in the historic part of the city. Though you do glimpse the ubiquitous Plattenbau apartment complexes but these are discreetly placed away from the centre and off the main thoroughfares. I was staying in an apartment just off one of these narrow but main streets, next to a monastery. This was a short walk from the river Gera which bisects the city and its famous covered bridge covered with houses and shops and very popular with the tourists. And the snapshotters. (Or should I now be saying selfies)? Erfurt even has a few antiquarian bookshops as well as the obligatory Hugendubel. But also quite a number of smaller new bookshops including the more niche. Wherever I travel, there is no lack of readers of printed books.

A few minutes back from my apartment back in the direction of the Hauptbahnhof is the building of the former Druckerei Fortschritt (Progress Printery), a name which is one typical of the German Democratic Republic. But even back then, everything wasn’t just all about progress. In the Eighties, the staff of the printery—the Brigade Technik (Technical Brigade) to be exact—had set about collecting printing machinery from all over the country. This was in honour of the hundredth anniversary of the death of Karl Marx with the aim of establishing a printing historical museum in Erfurt. This museum was established for a short time in the basement of the large building that was occupied by the VEB Druckerei Fortschritt on the Johannesstrasse—the so-called Gutenbergkeller (Gutenberg Cellar). Machinery and equipment from 1865 to 1930 were assembled to honour the long tradition of printing in that city. The first printing dates back to 1473 when a printery was established at the house called Zum güldenen Stern. The museum was intended to show a working printery from around 1890.

The fate of this museum after the demise of the German Democratic Republic could have seen it scattered or worse, dumped for scrap. But, fortunately, the collection was saved in the chaos of the demise as one regime was substituted by another. When the old People’s owned business was dissolved, the contents of the museum could be purchased by the city. The collection remained in the printery’s premises until 2000. The changeover saw many businesses taken over by West German firms or just abandoned and their contents and archives destroyed. The present museum premises, called the Druckereimuseum & Schaudepot der Museen der Stadt Erfurt im Benary-Speicher, were originally built in 1887. It was fortunate that this building was also important as part of Erfurt’s built heritage. The Benary Speicher means, literally, the store-house of the Benary, a firm of seed merchants. (I was told at my private tour that they even exported seeds as far as Australia). After the demise of the German Democratic Republic, the large area surrounding the building was developed as the Sparkasse bank’s new financial centre for the state of Thüringen. And so, probably, there was some deal to restore the original seed store and thereby make it available as a museum for the people of Erfurt.
As printing machinery and equipment is heavy, the printing museum occupies the ground floor of the building. Other floors contain and exhibit collections of South Sea island artefacts as well as of local antiques and antiquities, especially porcelain from the collection gifted by Hans-Helmut Kämmerer. The printing museum now here was established in 2001 and contains many examples of historic machinery and equipment. There are three iron hand presses (of the preferred European toggle variety), a very neat and small cylinder press dating from 1889 as well as a folding machine and stitcher. Lithographic presses, a huge repro camera, platen presses including bench-top platens, bookbinding machinery and equipment, an old hand-operated guillotine, a type cabinet with type, Linotype and Typograph casters and even a modernish CPTronic 150 typesetter. Perhaps the most important part of the collection is the complete workshop of the lithographic printmaker Ernst August Zimmermann which also includes a large collection of the firm’s original lithographic stones on display. 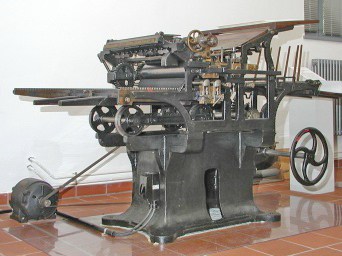 The museum does have regular hours of opening. However, circumstances do change. I arrived in Erfurt for a few days break during which the woman responsible happened to be off sick, without a replacement. I was given a phone number and after a few referrals was told that someone would be over to give me a private tour of the printing museum as well as the rest of the collections in the building the next day! I was lucky to be there at the right time. For although smaller than Leipzig, it is a collection that I would recommend to anyone who has the opportunity and time to view it.