And now what of the Penrith Museum of Printing?

The Penrith Museum of Printing, located in the large western Sydney suburb of Penrith, the gateway to the Blue Mountains, is probably today the best, best-run and best-known of Australia’s many printing museums. Threatened by a projected new sports facility, is it in danger of going the same way (i.e. into oblivion) as the Melbourne Museum of Printing? 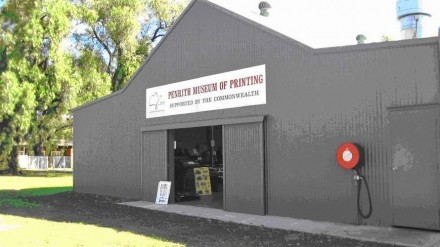 Australia’s biggest and best printing museum until recently was the privately owned and operated Melbourne Museum of Printing. This was dissolved and sold off a few years ago. I knew the owner, Michael Isaacsen, over maybe forty years. Knew him vaguely insofar as I came across him every now and again. I have also visited the museum several times, each time making a photographic record of the collection. I believe that Isaacsen was regarded by some as what could be called a ‘difficult’ person—to use a word some people I have met have used to describe him. But, in the last analysis, if it had not been him, who else would have collected this large and magnificent world-class collection of historic printing machinery and equipment? And if it had been someone else, would that really have made any difference to the eventual fate of the museum. Can anyone out there seriously believe that any Australian institution would have accepted such a collection no matter who the person?!

Australia has many printing museums—as does New Zealand. Many were established as a result of that great period of change away from letterpress. Machinery and equipment were going to the scrappers but a few thought that this legacy was worth preserving. And so, printing museums were established the length and breadth of our two countries. From Russell in the north to Hobart in the south. But what happens when these already old men volunteer for that great print shop in the sky? What happens to their museums? What happens to the heritage of print? Some close like another excellent but quite small printing museum on the outskirts of our capital city, Canberra—the Queanbeyan Printing Museum. Or they are ‘repurposed’ into printmaking workshops. Surely these can no longer be called printing museums? One such printery is the former bibliographical press at the University of Sydney Library, the Piscator Press, which is now really just an artist’s press.

The Penrith Museum of Printing is probably today the best, best-run and best-known of Australia’s many printing museums though I can’t say that I have visited every one of them. Their website is also well worth visiting. The museum was established by Alan Connell who had worked at the local newspaper, the Nepean times, as a typesetter. The museum was opened in 2001. The Nepean was an old and respected regional newspaper and when letterpress was no longer required, Connell decided to establish a museum based on what a printery of this kind and period—the 1940s—would have looked like.

Printing museums come in all shapes and sizes. The more catholic among us even include museums of comics and wallpaper, museums of the book such as the Meermanno and the like. In general, printing museums come in two varieties. The comprehensive ‘real’ museums which seek to collect all manner of printing machinery and equipment as part of the preservation of our material culture of print. And then the working printeries which are museums in the sense of having old machinery and equipment but with their main purpose being to recreate for the public a printshop from the glory days of letterpress.

The Penrith Museum of Printing is one of the latter. They have an excellent set-up from line casters to printing presses. You can watch printing being done as well as print yourself. There is a Heidelberg as well as a number of smaller and smallest jobbing platens. The pride of the place would have to be the big Wharfedale though they do have a neat little Kahle as well. Cylinder presses are a favourite of mine and a joy to behold. This Wharfedale has been sympathetically restored and is used in demonstrating printing. But they have not been remiss in other areas. They even have a library (a catalogue is available online). These libraries can often just be books dumped on shelves in with the miscellaneous equipment but some effort has been made to create a proper and secure library reading room here. I even volunteered at one stage to become their honorary librarian and offered to catalogue their books. Without success.

Australia suffers from a lack of public support but the Penrith Museum of Printing has been very fortunate in gaining industry support as in some real financial input. Part of these funds were used to expand the facilities of the museum. An extension as the existing space was getting very cramped. Essentially, we are talking storage sheds. The main one is large. Thus, a smaller extension was added as an annexe. They recently also remodelled the entry foyer to the museum which is now an inviting display room of what is to be seen in the museum. Pride of place in the foyer is a large mural depicting Gutenberg which was done by the Greek artist Chris Kranidis for the local Halkeas Printing firm about forty years ago.

The Penrith Museum of Printing is located in the large western Sydney suburb of Penrith, the gateway to the Blue Mountains. It was a sleepy little outpost when I first headed west around 1990. Real estate was cheap unlike today when Penrith has become a regional hub and acreage costs squillions. I met and talked to the founder, Alan Connell, many times over the years but was never told why exactly he did not establish the museum as part of a joint venture with their regional council. Was it to retain the museum’s independence from the shifting sands of local government? Land was cheap then. And there is another facility just across the railway lines and this area could have provided a permanent site for the museum—though it is not as central as the present site. There would have been fewer people in the region of Penrith that were better connected than Connell.

The solution was to site the museum in the grounds of the Penrith Paceway. Perhaps because this option was the result of Connell’s connections? Racecourses are large oval affairs with plenty of ‘dead’ land on the corners. These are used for stabling and the like but there is always space. The deal, so I remember being told by Connell, was to create a symbiotic relationship. The museum would get to use their space. Many of the visitors were buses full of senior citizens on a day out or tourists. And these could be directed to the facilities of the racecourse thus providing them with some return. Not so long ago I was told that the racecourse was thinking of developing this ‘unused’ space and the museum now needed to think about its future.

Moving a printing museum—those many large and heavy casters and presses—is no easy task. But the real challenge is just to find a place to site the museum with permanency. Since the time the museum was established, Sydney land prices have skyrocketed into a parallel dimension. Not only are people finding it impossible to afford to buy a house—Sydney has become one of the most expensive and unaffordable cities in the world to live in—even renting has become unaffordable. So, where does a printing museum find land and premises to relocate?

The story doesn’t get any better. In a recent report on the news a few days ago, there was a lengthy discussion not on the museum but of the plight of the racegoers. Penrith is also the home of the local football club, the Penrith Panthers. We now have a Conservative State Government but one which also has an eye to retaining office. They only recently took over from a ‘discredited’ former Labor Government. A few years ago, the new Government proposed the renovation of one existing football stadium which eventually would cost a mere A$828 million, as in almost a billion dollars. The State has been dramatically affected by our recent catastrophic bushfires as well as by last year’s floods of biblical proportions. You can tell you are entering New South Wales for the roads are a string of potholes. The Blue Mountains council recently reported that it has four hundred million dollars’ worth of fire and storm damage to make good—and this is a remote and tiny regional community. And the Government prioritizes… football?

Bread and circuses? I thought the idea had been shelved as there was so much public opposition to it at the time. Then, recently, its official opening. In times of crisis people seem to prefer to bury their heads in the sand. It is quite frightening to see just how much focus there is on sport here at the moment when the house is collapsing ‘round us! As if this wasn’t enough, there were also proposals for four other sporting venues. I believe that three have been scrapped but not the one proposed for Penrith. Even a well-known local sports identity commented that if money was to be spent, then it should not be spent on replacing an existing stadium opposite one of the wealthiest sporting clubs in the country.

The Government proposal was to demolish the existing sports stadium just across the road from the Penrith Paceway and the Penrith Museum of Printing and to build a A$309 million—that’s almost a third of a billion—new stadium on that site. But the logistics of the build… So, there was a recent idea floated to acquire the Penrith Paceway, demolish it and to build the new football stadium on their grounds instead of on its existing stadium site. Which of course would mean that the Penrith Museum of Printing would be demolished in the process!

The museum’s website comments on their concerns with the project because the museum would have to move—but also move within a much shorter timeframe than expected.

Are we looking at the makings of another Melbourne Museum of Printing?