Is there a future for our printing museums?

Thoughts on Australian and New Zealand printing museums from our Australian correspondant and avid collector of all kinds of documentation concerning printing and the book arts, Jürgen Wegner. This article first appeared in The Shadowland newsletter, #127, October 2021.

The shining light in Australian and New Zealand printing history is the printing museum in Wellington, i.e. the Printing Museum Inc. In this instance I won’t follow what has been and is ‘editorial policy’ in these newsletters. To only report the positive and not negative, the first of which has to be the name. For me it started with online searching. Ever tried searching printing museum online? I guess that it has a lot to do with the fact that I am a librarian but also a cataloguer and so feel established corporate names need to be distinctive. To call something Printing Museum Inc. is a little like someone calling themselves John Smith. But this is a minor point. The issue for me is really one of branding. The Printing Museum Inc. is just so on top of everything that it surprises me that they haven’t thought of this as well. Just think of all those household brand names which have become iconic features of our cultural landscapes. And then we have the Printing Museum Inc.—a totally generic name. They are in the process of creating a distinctive printers’ mark for their museum press but it seems odd that the museum doesn’t also try to become an iconic international museum brand as well.

I am also concerned about well-intentioned amateurs and their so-called restoration of presses. The Printing Museum Inc. recently ‘restored’ and old Albion iron hand press (Type high, autumn 2017, p. 6). The Penrith Museum has also recently restored one. But this is common practice. Stripping back the historic patina and traces of the past and then applying a coat of high-gloss house paint. Often with addition of gold, green, red. Doesn’t anyone watch those antique shows? In original condition! In its original box and so worth many times what one without is! Would you buy an early nineteenth century piece of antique furniture and get the paint stripper out and then stain and coat it with a bit of Estapol? So, why do people in printing museums feel the need to do this?

The first rule of restoration is, do the absolute minimum. A friend of mine in New Zealand bought himself a Stanhope. He wants to print with it and so had a carpenter replace the rotten wooden handle, keeping the remnants of the old and all documentation. I think I even shocked one professional museum curator once by saying that if I had a printing museum, I would put that old and historic cylinder press on show largely as is. It had lain unused in the printery for decades in the condition of the last day of its working life. Still covered with splotches and splatters of ink. Do these need to be removed if it is just going on display? After all, you want to show visitors to the museum that it was a real working printing press. And those corroded rollers. Do they need to be replaced by shiny new blue ones if people are just going to look at it? Sure, if it is going into the museum printery and is going to be used in printing courses. But, again, the first rule is: Original Condition. And so, a personal plea to anyone in printing museums out there. When thinking of restoring that old historic printing press you have just acquired. Don’t! Or at least get in touch with a professional museum curator first. 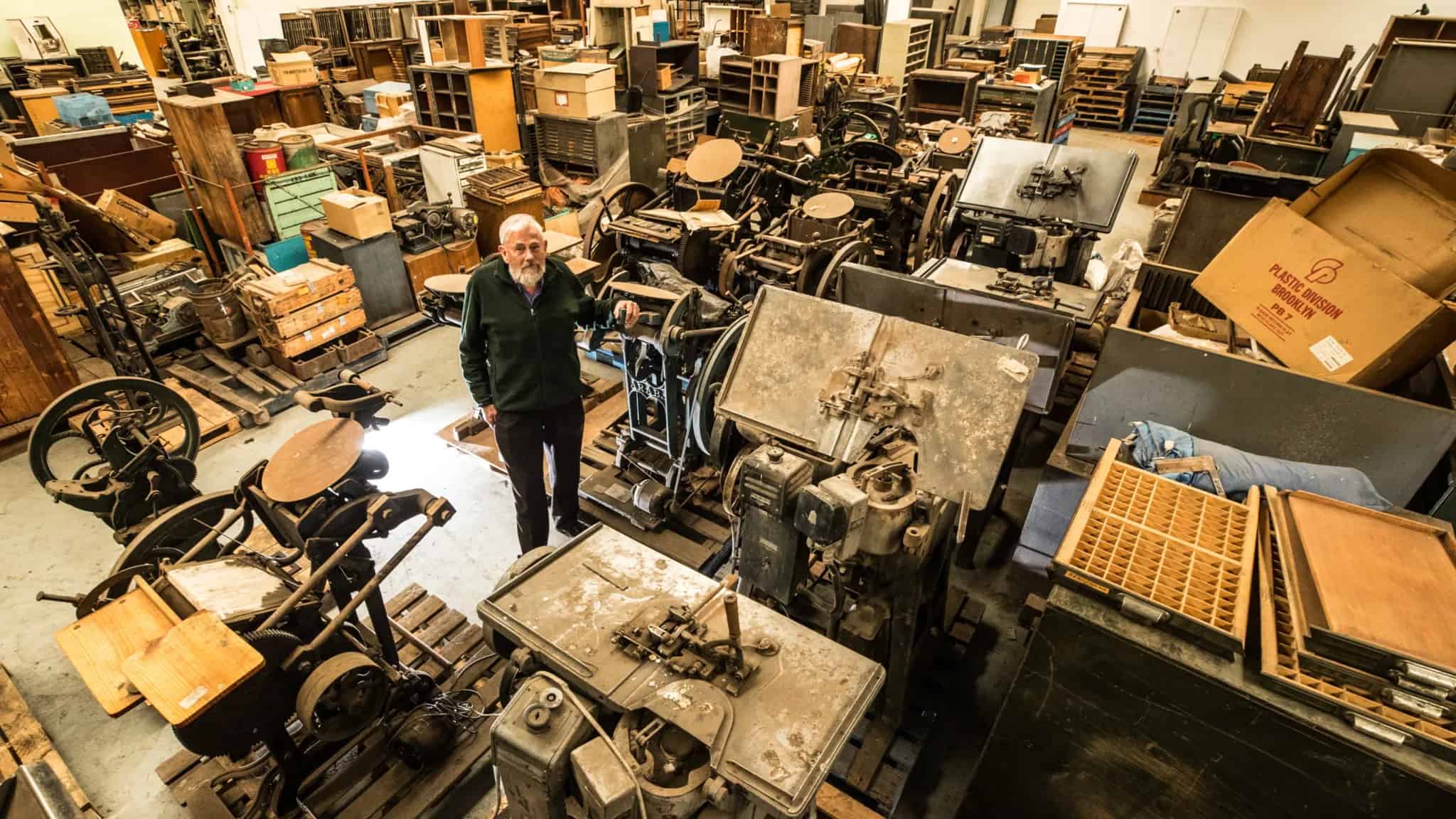 Michael Isaacson in the collections of the former Melbourne Museum of Printing.

The Melbourne Museum of Printing closed and its substantial and nationally important collections were unceremoniously auctioned off. It was reported in Type high, the news-letter of the Printing Museum Inc., that the rent was in arrears to the extent of six or seven hundred thousand dollars. (No details on what the auction actually fetched though I’d be surprised if it was anything near that). The comment was: ‘…no Australian institutions could bother replying to the email alerting them to the danger…’ and so a large and significant part of the collection went over to New Zealand. This is to the credit of a number of Australians who assisted in making sure the Printing Museum Inc. got the important material. But even more so, that the people at the Printing Museum Inc. were motivated to undertake the considerable effort required. Two museum staff members were even flown over to Melbourne to spend time cataloguing material for the auctioneers.

I have visited Isaacsen and the Melbourne Museum of Printing on many occasions. I knew him when he was starting and had a warehouse full of treadle platens to sell to letterpress enthusiasts—who then seem to have been almost nil. He was also attempting to cast type via his Australian Type Foundry. Years later on another visit with a local colleague I attempted to get one copy of a type specimen book from Isaacsen. He had a whole pallet full of the same book and refused to give up even one copy. It was the integrity of the display. That he intended the pallet to become some sort of historic display to show how such material was stored! In the end, I did get one of them after much assistance from my colleague. But as is always the case with me, the auction was at short notice, it was to be held just after I arrived back from Europe (jetlag) and then there was the logistics. I was offered some material remaining much later but the contact person could not be contacted online. So, no printed material came to Brandywine.

Isaacsen was very keen that I should never mention to anyone his amazing collection of Monotype mats. I have done several ‘photoshoots’ of the whole museum down to what was in cupboards and rubbish bins but he only let me photograph the piles of mats on condition that I would never show the photographs to anyone. Fortunately, these have all gone to the Printing Museum Inc. which already had a significant collection of Monotype mats. There are a great many printing museums around Australia and New Zealand. The Melbourne Museum of Printing was arguably the most significant there has ever been. But what do these museums do? Ferrymead in Christchurch has been quite active but the Printing Museum Inc. is really the outstanding museum in our countries.

You also have to take into account that their work is done on a shoestring. How much really would a properly state funded printing museum cost? Even for a small country like New Zealand—small in area but also population, the whole of which is about that of one of our cities—this should be possible. I was given a tour of the museum premises as well as their new Wellington Centre for Book Arts by the Secretary/Treasurer, Dan Tait-Jamieson, who also showed me a building they were interested in. On the fringes of the city with easy access to public transport. A large modern warehouse building with a caretaker’s flat above. The amount was negligible. It could be demonstrated that the revenue flow was sufficient to pay off the loan. And did any bank come to the table? I suspect that a bank manager thinking printing museum was just a leap too far into a parallel universe.

Instead of just collecting, the mats are being used to generate revenue and also to provide a service to the many letterpress printers still in operation. And this is a growing trend. And not just New Zealand’s letterpress printers. Type has been cast for some of our brightest and best presses in Australia such a Derek Lamb’s Officina Athelstane and Alan Loney’s Electio Editions. At a cost that does not make it prohibitive for all but the high flyers. Anyone can afford this type. But I was surprised by some of the comments used in the report of this acquisition in their latest issue of Type high (cf. SN#127.8 above). They express concern at the moral and ethical issues surrounding the removal of culturally significant items and collections from a country. And let’s not make any bones about this. The collections of the Melbourne Museum of Printing were ones of national cultural significance.

The comment there was—and here in full—’that no Australian institutions could bother replying to the email alerting them to the danger shows that the matrices should stay awhile’. Note the last phrase! With the example given of the Elgin Marbles as well as the Māori momomokai (ceremonial preserved heads) held and now returned by the French. There are, naturally, reasons why some such materials should and need to be repatriated to their country of origin. But for the most part, what would have happened to such significant cultural heritage had it not been ‘stolen’ back then? Where would the Elgin Marbles be if they had just been sketched and left in Greece. And all that other stuff? I am certainly very much in the minority in my thinking that the people who have valued this material, have preserved it and kept it safe for a century or more… have all earned the right to keep this material safe and to continue to keep it.

The Editorial addresses the moral and ethical issues of material such as the Melbourne Monotype archive going to New Zealand. Well, let’s not lose any sleep over this. The Printing Museum Inc. were the only ones who could be bothered—apart from our scrap metal merchants! (Maybe that’s where our national culture really deserves to be)?! The Printing Museum Inc. will not just be hoarding it and, let’s face it, where would our history be without the so-called hoarders! They will be putting it to good use—and not like some museums which let visitors souvenir individual mats or even sell then attached to souvenir cards. They will be casting type. It should not be forgotten that printing is and has always been an international affair as is our printing history.

But the comments are not all optimistic. The Editorial does raise the question of the survivability of museums such as the Printing Museum Inc. I am of the opinion that such major national cultural resources should be if not run and operated by the state then at least to a large extent underwritten by them. But is this realistic or even desirable in an age where our institutions are moving away from collecting. And are even deaccessioning material in their collections. The Editorial also makes the comment that this is not exclusive to printing museums and that there are so many other important collections out there—private collections—whose future looks as grim as that of the Melbourne Museum of Printing.

Can our printing museums—and other collections—survive our collective apathy and neglect? The Editorial mentions the work of the Type Archive in London but can the Printing Museum Inc. in Wellington really survive and prosper into the future as an independent and self-funded entity? Especially when they need space for their growing collection as well as for workshops, courses and not forgetting a library? Australia’s National Printing Museum now resides in Wellington. But how long can such institutions survive into the future?