Established by the Alpha Bank, Greece's largest privately-owned banking group, the Banknote Museum is devoted to the history of paper money with a special emphasis on the Ionian Bank between 1839 and 1920, before it lost its privilege to issue paper money.

See more images of the Banknote Museum and its collections in the AEPM photo gallery HERE.

Banks are by nature discrete. They don’t like people prying into their affairs. So it is always interesting to visit banking museums in which printing usually occupies a significant place because of the important role which paper money and other printed documents have played in the financial world over the centuries. In addition, because of the need to render counterfeiting as difficult as possible for both financial and political reasons, the techniques of security printing have often been at the cutting edge of graphic arts technology. In the case of the Banknote Museum of the Ionian Bank the pleasure of the visit is enhanced by the fact that it is located in the busy town of Corfu on the Greek Island of the same name in the Ionian Sea just off the West coast of Greece where it meets its Northern neighbour Albania.

The bank note Museum is easy to find for it occupies the first floor of the large neo-classical building which the bank built as its head office in 1845-46 in a square in the centre of town. (Though if you are thinking of checking it out on Google maps you should bear in mind that the square is known by two different names: Iroon Kypriakou Agonos Square and Aghiou Spyridonos Square.) 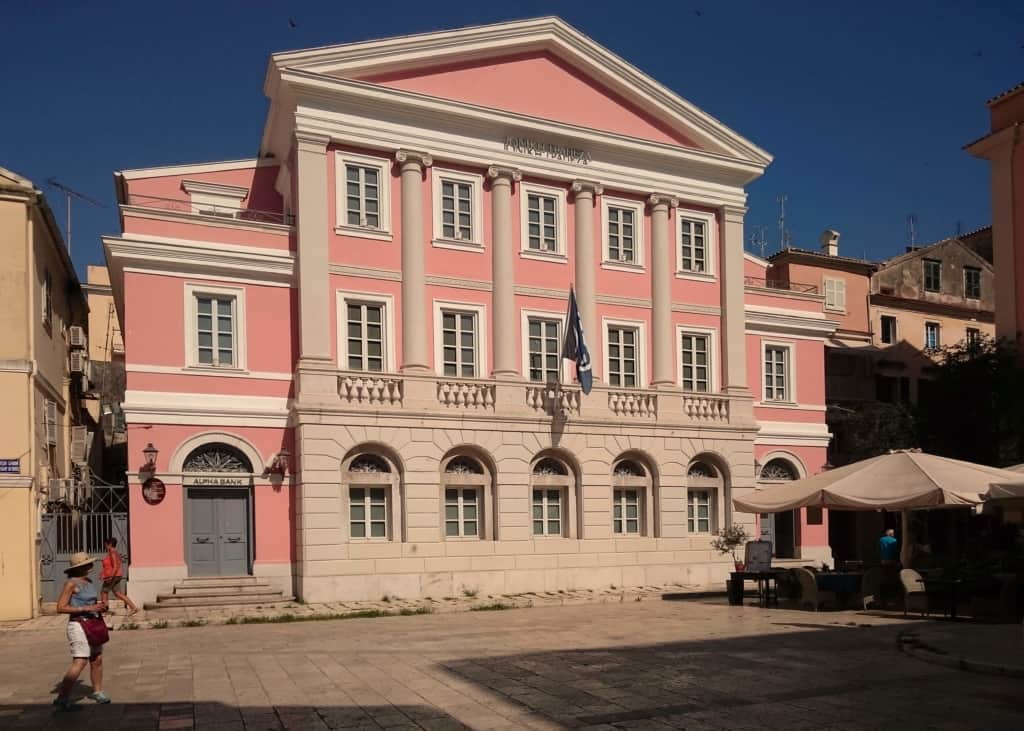 Exterior view of the Museum. The building was designed by the leading Corfiot architect Ioannis Chronis.

As its name implies the Museum is devoted to the history of banknotes. There is of course a fair amount of historical background about Greek banking in general. But the accent is fairly and squarely placed on the evolution of the forms and uses of banknotes, in particular those issued by the Ionian Bank between 1839 and 1920, before it lost its privilege to issue paper money.

The Ionian Bank no longer exists as such for it was acquired in 2000 by Alpha Credit Bank which, under the name Alpha Bank, is currently Greece’s largest privately-owned banking group. The objects displayed in the Banknote Museum of the Ionian Bank are part of the extensive Alpha Bank Numismatic Collection.

The Banknote Museum first opened its doors to the public in 1981. Then, in 2004, Alpha Bank decided to renovate the building and with it the Museum’s permanent display which reopened a year later and which was again revamped in 2016. Over the years the Museum has put on various temporary exhibitions organised by the Art Collection, the Numismatic Collection and the Historical Archives of Alpha Bank.

The permanent display is laid out demurely – as befits a bank – in half a dozen spacious rooms which, though very airy and pleasant for the visitors are certainly over-lit for these days of draconian conservation standards. As there are few printing artefacts the extensive collection of banknotes is displayed in horizontal and wall-mounted cases which are also accommodate a certain number of engraved plates and stereotype flongs. The explanatory panels and captions are clear, concise and well translated into English, and a handsome 40-page illustrated catalogue is available which describes most of the principal objects on display. A second catalogue of a 2014-2015 temporary exhibition dedicated to the Ionian Bank’s privilege of issue provides an excellent historical introduction to the origins and development of the bank and its place in the local economy. 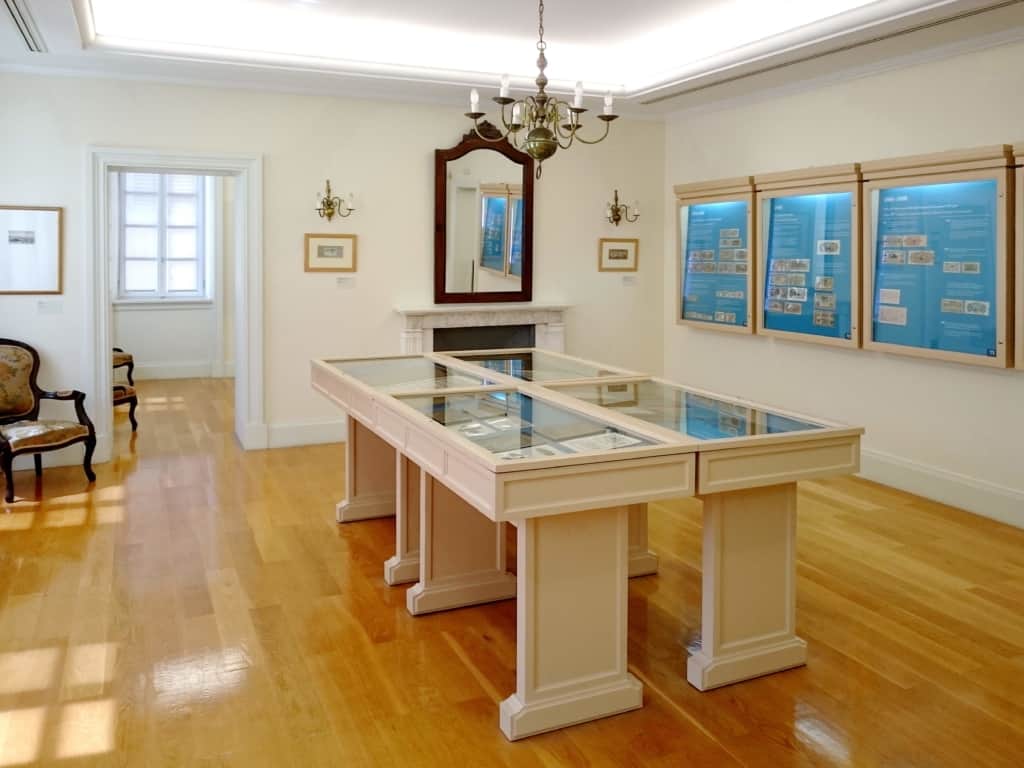 The context of the Ionian Bank privilege to print banknotes was that of the creation of the modern Greek State freed from Ottoman domination. The first Greek non-metallic money was issued by the Provisional Government immediately after the establishment of the newly independent Greece in 1822. This was the piastre, which was replaced seven years later by the phoenix as the monetary unit of modern Greece. With the arrival in 1833 of King Otto and the regents put in place by the Great Powers (Britain, France and Russia) the phoenix was in turn replaced by the drachma, named in honour of the money of ancient Greece. Then in 1841 the National Bank of Greece was established with the exclusive privilege to issue the banknotes of the Greek State.

In the meantime, the Ionian Islands were under British protection which allowed the development their own banking network, money and banknotes. Under British rule and with decisive British financial intervention the Ionian Bank was established in London in 1839 to finance two of the principal activities of the local economy, the production and trade in raisins and olive oil, and from time to time to finance the Ionian State. It also had the exclusive right to print banknotes for the Ionian Islands for a twenty-year period, a privilege which was renewed shortly before their incorporation into the Greek State in 1864 and would be renewed several times again until the National Bank of Greece obtained the exclusive right to issue banknotes in 1920.

In 1927, as part of an economic restructuring of the country, a committee of experts of the League of Nations estimated that the fact that the National Bank of Greece acted both as a commercial bank and as a bank of issue was problematic. The result was the creation of a new politically independent bank, the Bank of Greece with the exclusive right to issue banknotes. The first banknotes to be issued were printed in the USA by the American Bank Note Company in New York. 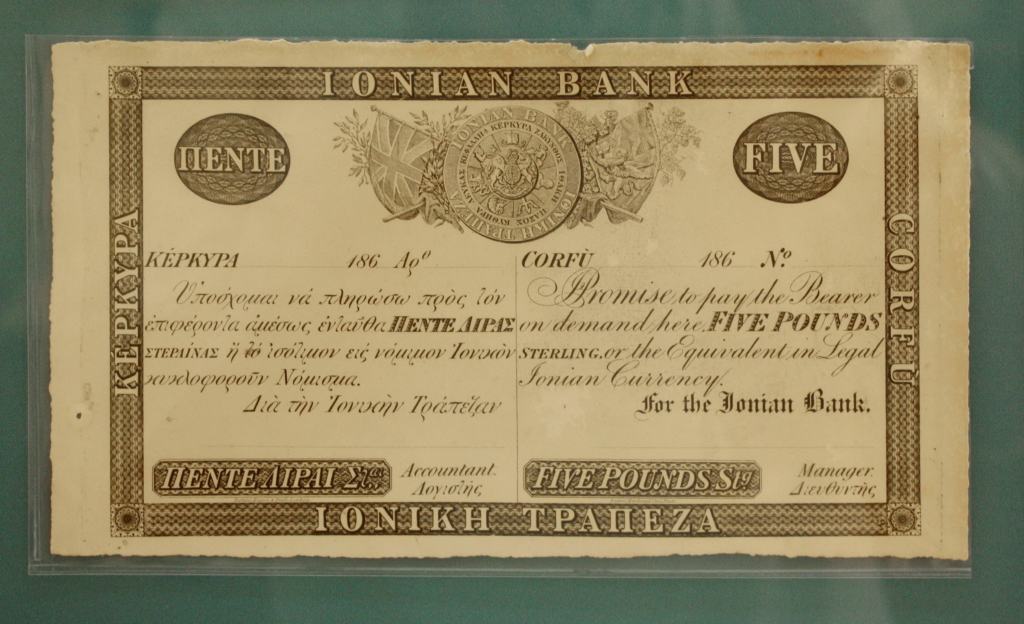 The many items displayed in the Museum include banknotes of all periods, from the earliest days of Greek banking to the present day; early archival documents; engraved intaglio plates, stereotype flongs and relief plates; original artwork and uncut printed sheets of banknotes. Above is a five-pound banknote from the very earliest years of the Ionian Bank, though it is not known whether such notes were ever actually put into circulation. The importance of the British presence in Corfu and in the creation of the Bank is clearly seen in the name of the currency and bilingual Greek-English notes. 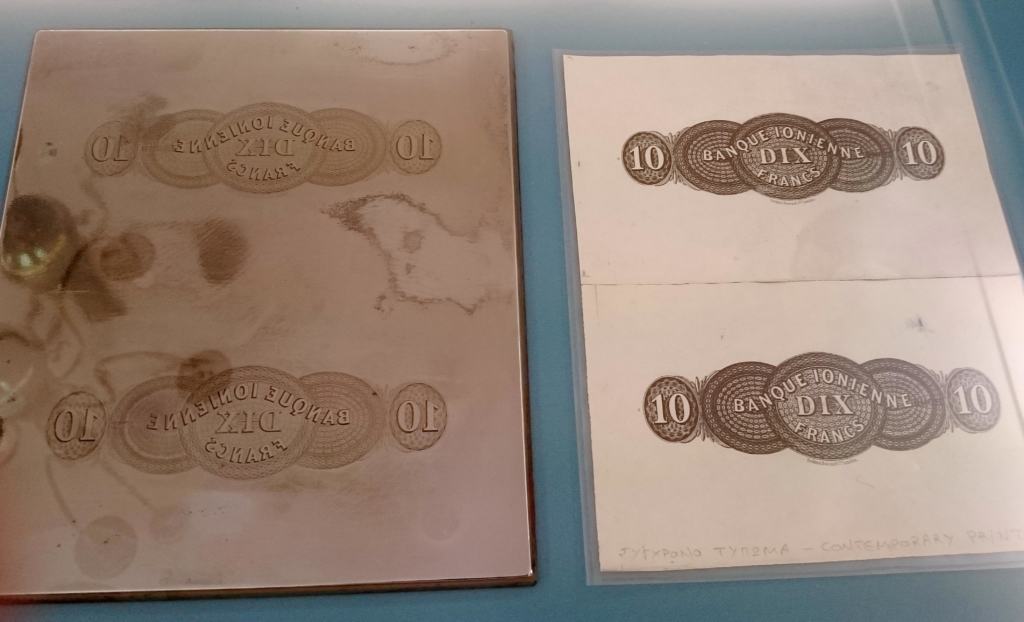 And here we see an intaglio steel-engraved plate with an original proof taken from it. The intricate patterns commonly used in banknote printing discouraged all but the most highly-skilled forgers. 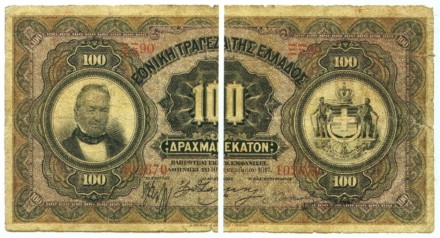 Small monetary denominations are usually coins. But in times when metal is scarce it is sometimes necessary to have recourse to paper money. In 1885 the first coin notes were introduced in Greece when, due to lack of metal for coinage, the National Bank authorised the Ionian and Epirothessaly banks to issue coin notes of one and two drachmas. At he same time a penury of 5-drachma notes led to 10-drachma notes being cut in two, each half being worth 5 drachmas! Twelve years  later, the National Bank of Greece issued a 5-drachma banknote but because of the practice of splitting 10-drachma notes it bore the mention ‘It is forbidden to cut this note in two’.

In 1922, after the Balkan Wars, ,the First World War and the catastrophic Asia Minor campaign the Greek economy was in a bad way. To ease its finances, the State borrowed money from the citizens in an original way – by cutting all the banknotes in circulation in two. The half with the bust of the governor of the bank, Georgios Stavros, remained in the possession of the holder and the other half was exchanged for twenty-five year treasury bonds with an annual interest rate of 6.5%. The operation was repeated in 1926, but this time the State recovered only a quarter of the banknotes.

These are only a few random examples of the rich collections of the Banknote Museum which is well worth the visit for anyone interested in printing history, especially of the less often exhibited varieties. And in case you are hesitating, the staff of the Museum are always more than happy to give you a personal guided tour of the Museum in impeccable English (or in Greek of course!).

For visits and information:
Konstantinos Christopoulos

The Banknote Museum of the Ionian Bank is a member of the AEPM.