Transmitting by doing in a workshop context

Talk given by Thomas Gravemaker (LetterpressAmsterdam) during the News session at the conference of the Association of European Printing Museums, Safeguarding intangible heritage: passing on printing techniques to future generations, held at the Nationaal Museum van de Speelkaart, Turnhout, Belgium, 23-26 May 2019.

Good morning, my name is Thomas Gravemaker and I run a letterpress printshop in Amsterdam.

My love affair with letterpress printing started in 1970, when I managed to buy my first printing press, an Adana 5 x 3. Setting off with that small press and two cases of type that were donated, I quickly became hooked on printing. Things took a more serious turn when I managed to get an Arab treadle platen press that I fully restored, traveling from Amsterdam to London to the Science Museum obtain more information and to Excelsior Print Suppliers in London for spare parts. 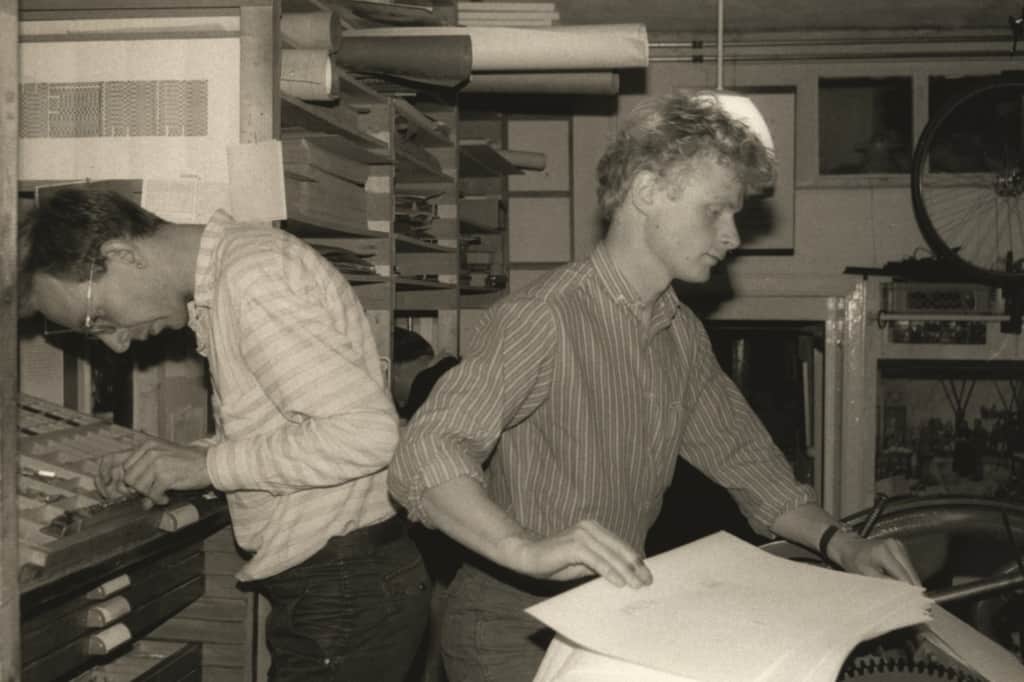 People started taking an interest in what I was doing and it didn’t take long before I was invited with my small press to participate in craft events and poetry festivals.

My print shop in the centre of Amsterdam was situated behind my apartment, and it was here that I started running my first ever ‘letterpress courses’. Three young students who desired to become publishers and who studied Dutch literature at the university of Amsterdam, turned up every week to be taught how to set type, pull proofs and print. Several publications did see the light and one of the three students has become a publisher of one of the Netherlands’ finest literary magazines.

In the early 1980s, I moved to London – where among many others, I befriended John Ryder – and from there I moved to Paris. During these years I further developed and shared my knowledge and experience.

I continue to instruct and teach people in my own printshop and abroad and often advise them in setting up their own studios, and find equipment and supplies.

I would like to introduce you to three of my ‘pupils’.

Sakari Mannistø did play the trumpet in the Finnish Army’s band, climbed mountains and trained as an industrial designer, before turning to letterpress printing. He contacted me in 2013 to ask me if I could tell from some photographs if an Arab press that he was planning to buy was complete and if I could teach him how to work with this press. Shortly after, Sakari travelled to Amsterdam and we spent several days working together on my own Arab press. The following year, I travelled to Turku to help him organize his workspace, set up the equipment that I found for him and instruct him on his newly bought photopolymer machine. I have since returned several times to Finland and when I walk into the beautiful print shop that he moved into right in the historical centre of the city, I realise that I’ve succesfully transmitted the knowledge and the passion that I’ve acquired over the years.

Almost every Friday morning, I receive a phonecall from Sakari to keep me updated on progress being made or to discuss a problem that might have occured. 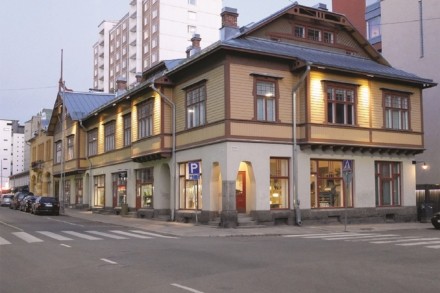 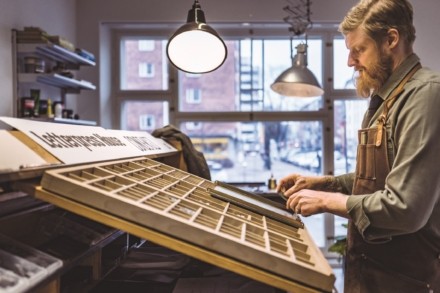 It was while I was teaching in a print studio in Hilversum, close to Amsterdam, that I met Niels Goovaerts and Katleen Vereecken. Niels had been offered a weekend letterpress course by Katleen, who herself was also keen to learn more about it. Katleen works as a teacher in the Freinet school ‘De Zevensprong’ and already had experience with setting type and printing with young children, and Niels works as a director of ArtForum, an educational art association. Their dream was to convert part of their farmstead in a small town close to Leuven  into an open print studio and work with children and adults using text and illustration. After having participated in several of my workshops, Niels managed to secure a small Korrex proof press and a couple of cabinets with type. He too, was bitten! In 2015, I travelled to Bierbeek and ran together with Niels and Katleen the first letterpress weekend in their studio. Since that first one, when we had to improvise a bit, several others followed and by now the place has been completely renovated, the wooden doors have gone and were replaced by large windows, the floor has been tiled and a separate bathroom has been installed. They’re still working on the living quarters of their house and as soon as that has finished, new workshops will take place here again. 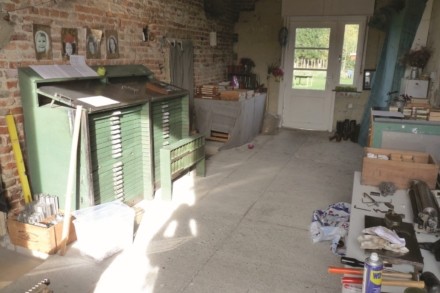 In My Back Yard, Den Haag, The Netherlands

In February 2017, Eva Lebens arrived for a 2-day private letterpress course in my studio in Amsterdam. Eva, who studied European and International law and worked for the Dutch government for a decade, had – after a 5-year spell in South Africa and the USA – returned to her native country. It was during her stay in the USA that she visited a letterpress studio and became interested. During two days, Eva eagerly picked up every piece of type, inked up the press, cut the paper and printed. Within a year, Eva too had acquired a Korrex proof press, cabinets and type. About a year ago, she seriously started printing, sometimes facing problems – it’s a steep learning curve – but always eager to go further. She now works a lot with children developing their language skills through printing with moveable type. Eva befriended other letterpress printers and exchanges information and ideas. One of her dreams is to start a postcard revolution, as she would like all of us to receive more handmade and handwritten cards.

Helping people to find equipment and set up their studios, transmitting knowledge and skills, – and not only preserving our heritage – has been and still is a very important factor in my work. Without this, all these fantastic collections would end up being ‘dead’ collections. 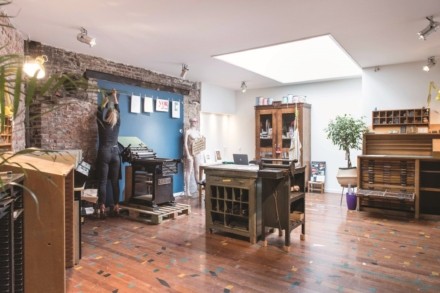 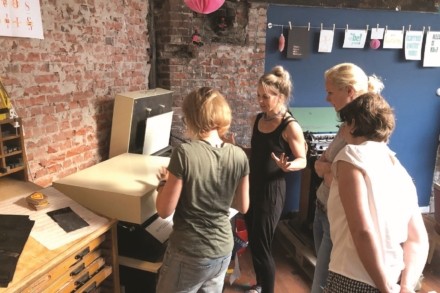 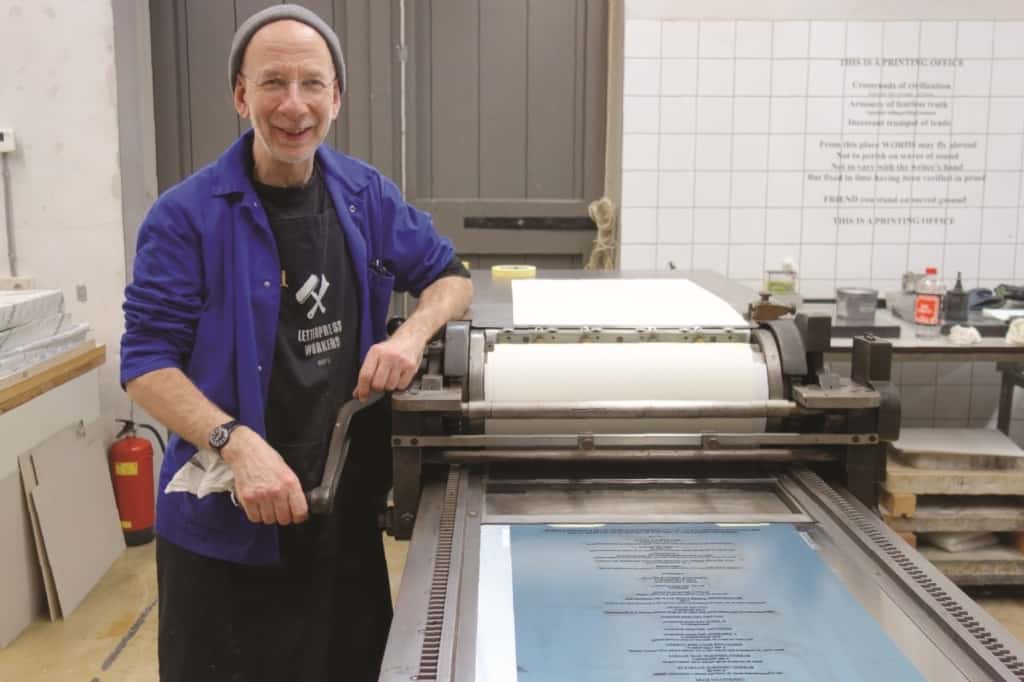