The annual general meeting of the AEPM was held at the Nederlands Steendrukmuseum, Valkenswaard, Netherlands, 4 November 2016 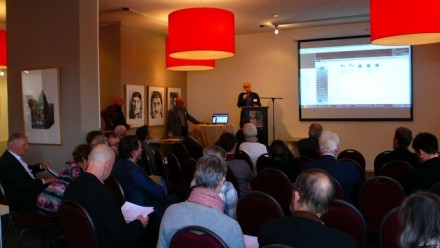 Delegates at the Aepm annual conference in 2016.

The following members were present

Approval of the minutes of the 2015 meeting

Minutes of last annual general meeting in Cornuda, Italy in 2015 were approved, with thanks to Rickey Tax for their preparation. The minutes had been sent previously with the announcement and agenda of the 2016 meeting.

75 paid up members at the end of October 2016, from 14 European countries + Brazil, United States and South Korea.
6-8 members have not yet renewed their membership, though several are still underway/promised.
26 new members joined in 2016.

Rolf will give a detailed account, so just a couple of general remarks.
Income was up in 2015 at roughly 4,000 euros. 2014 had been an expensive year because of the new web site and legal costs for the registration of the Association. In 2015 we attained our cruising speed with no exceptional items. The additional costs resulting from our new status as a not for profit association are minor (and assured). The Cornuda conference incurred a small net cost for the Association.

In 2015 it was decided to launch a printed publication. For the moment the project is maturing…

Our current finances cover the annual conference, future development of the web site, publications, communication (flyer), plus other modest projects yet to be imagined.

It was decided in 2015 to close our German Sparkasse account, thus finalising our ‘officialisation’ as an Assocation.

It was decided at the 2015 AGM to hold future conferences in the Spring. This will allow us to hold the AGM earlier in the year and to approve accounts, provisional budget and projects for the current year.

The Cornuda conference was successful. It was hosted by the Tipoteca italiana. 60-odd members took part, an increase on Mainz in 2014. Very many thanks to the Tipoteca and to Sandro Berra.

AEPM 2017 will be hosted by the Typography Museum, Chania, Crete (Greece), who had announced their candidacy at the AGM in 2015. The organisation of the event is already underway and will be announced following a recent meeting which I had in Crete to sort out the details. (Thanks to a generous invitation from Yiannis Garadakis the founder of the Museum who was, unfortunately, unable to come to the 2016 conference in Valkenswaard.)

30 representatives of the AEPM made the trip to South Korea in September as guests of Cheongju City and the Jikji Festival. The meeting was very interesting and positive. A decision was taken in principle to meet again in two years’ time with a broader group of printing museums to officially set up the Association. The creation of a worldwide association will not have any direct impact on the work of the AEPM.

Online registration and payment for membership and conferences were set up on the web site and are running well.

By Belgian law we annually have to submit all our financial accounting documents for tax auditing to our Commisaire aux comptes, Céderic Bergamini of the Bureau Darville SCPRL, 1050 Bruxelles. On 28 April 2015 he approved our 2014 balance sheet.

In 2015 we paid € 544,50 to Bureau Darville, Bruxelles for auditing our 2014 balance of accounts for the Belgian authorities. This is required by our ASBL (not for profit association) status.

Another major expenditure was € 485,00 to Chesapeake for additions to our website,  € 120,00 to Infomaniak for hosting, and € 84,81 to Speedbone for web-space and domain registrations.

Postage for a mailing to members and potential members was € 225,82, and a book gift for Robert Clerebaut who hosted a board meeting in Bruxelles was € 60,28. The remaining expenditure consisted of bank fees for the Sparkasse bank account in Mainz.

Thanks to our registration as an ASBL (not-for-profit-association, gemeinnütziger Verein) in April 2015, we were able to immediately open a business account at ING Bank in Brussels for online banking. In the exeptional case of cash transactions, the money is immediately transfered to our ING bank account.

In July 2015 we also opened a transfer-account with PayPal Belgium. This account served for those members and especially for conference participants, who for various reasons do not use SEPA money transfer. PayPal seems to be more simple for some members and it has worked well. Turnover via PayPal in 2015 amounted to € 1.351.00. PayPal directly deducted fees of € 54.64, which makes 4 % extra cost. Because of the extra fees PayPal should only be used, if necessary! From our PayPal account we immediately pass on all incomming money – after deduction of PayPal’s fees – directly to our ING account.

Support to Steendrukkmuseum for the 2016 conference shared with IADM is likely to be of the order of € 500,00 (we will know the exact amount in the coming weeks).

Budget for 2017 still has to be costed in the light of the projects decided.

The report of the treasurer was unanimously approved

Frédèric Terrier agreed in Cornuda to do the printing, but we also need help with editorial coordination to collect and edit the papers.

Johan De Zoete: why not just put it on the internet? It was replied that they are already on the website. But a need for a physical report was expressed at previous AGMs.

Michael Twyman: have we allowed for reproduction costs for illustrations for instance…?

Rolf Demmerle: it is still too early to make an accurate estimate.

Roger Munch: the IADN doesn’t do paper publications anymore (stopped 6 years ago), due to problems of financing. Also, given our audience, the design has to be perfect! It is a good idea, but rather too complicated.

Paul Jessop: Even on internet we need good editing and design.

Ronald Steur: And we need other external people to do it.

Rolf Demmerle: But we have the necessary finance so we can press on and see what comes out of it.

Johan De Zoete: The publication should include not only talks from previous conferences, but also for this year.

It has more or less reached cruising speed but direct posts on the website by members are still few and far between.

For the moment most are sent to our webmaster (Alan Marshall) who posts them.

There will be several minor improvements made to the website in coming months.

Rolf Demmerle:  It is important to have something on paper that we can send to potential members: museums, individuals and others. Our target audience (Paul Jessop) is broadened, as we see in the number of members. It is important for our networking strategy.

Ronald Steur: Rather than a multilingual brochure, an English text would be sufficient!

Practical propositions were made by the following members:
– Thomas Gravemaeker will do the lay-out,
– Eckhart SchumacherGebler will print it letterpress,
– Coordination will be done by Jürgen Bônig,
– If multilingual text editing proves necessary we could call on the services of Sheza Moledina, a collaborator of the Lyon Printing Museum (on a paid basis).

The format decided upon was: 3-fold, recto-verso, in three languages : English, French, and German.

It will be sent out to all members and distributed to member museums.

As a reference in the field of printing heritage, the Aepm is regularly sollicited as a partner for funding requests and research projects. In general these requests do not require any investment in time of money on the part of the Aepm. Rather, they are intended as a means of obtaining a ‘priviledged’ access to the community of printing museums.

Johan De Zoete asks if the Aepm should play an active roll ?

Michael Twyman: do we support also projects whose content we are not sure of? How can we judge the quality of projects requesting the support of the Aepm?

Current requests for support/collaboration are:

1. Department for book history, Lund university, Lund, Sweden (Kristina Lundblad). Research project intended to explore the relations between books and printing artefacts. The project is Swedish based but hopes also to visit other European museums and to organise a seminar. Requires no financing or time committment on the part of the Aepm.

2. AHRC Research Centre for comparative history of printing, Leeds, UK (James Mussel). This a request for funding of  a network on historical letterpress printing today: what has been saved, how is it used, what lessons can be learned from letterpress in the digital present? There will be a workshop in 2017. Through the Musée de l’imprimerie et de la communication graphique (Lyon, France) Alan Mashall was contacted with a request to join the advisory board. Requires no financing or time committment on the part of the Aepm.

3. Belgium: national collaborative exhibition involving eight museums /collections in the field of graphic heritage, planned for the second half of 2018. This would be an ideal time for the Aepm to meet in Belgium. Unfortunately it couldn’t be hosted by the MIAT due to renovation that year. Might there be another belgian candidate? This should be discussed further.

No people from Greece present at the meeting. (Elia Koumi unfortunately had to cancel her trip at the last minute owing to illness and her replacement could not get a flight at such short notice.)

The theme of the conference is: Making History. Collections, collectors and the cultural role of printing museums. It will be focussed on the questions facing independent printing heritage organisations (such as St Brides, Enschedé or our 2017 host, The Typography Museum).

A call for papers will be sent out to members of the Aepm in the next few weeks.

The 2017 AGM will be called upon to renew/re-elect the board. Alan Marshall made an appeal for candidates willing to take an active part in the running of the Aepm, the idea being that each board member takes on a small, manageable task which fits in with his or her inevitably busy schedule.

In particular, we urgently need to find a new treasurer to replace Rolf Demmerle who indicated two years ago in Mainz his desire to stand down. All positions on the board (president, secretary and other board members) are open to candidates. It is very important to have new board member and a call for candidates will be sent out to members early in 2017.

The next annual general meeting will be held at the Typography Museum, Chania, Crete on Saturday 13 May 2017.

All the points on the agenda having been dealt with, the meeting was closed at 18h45.

Robin Boone
(acting secretary in the absence of Rickey Tax).

This post is also available in: Inglese, Francese, Spagnolo, Tedesco