The living heritage of the French Imprimerie nationale

During the Journées européennes des métiers d’art we took a trip to the North of France to visit the Atelier du livre d’art et de l’estampe (Groupe Imprimerie Nationale), currently situated in Flers-en-Escrebieux. Launched in 2002, the Journées européennes des métiers d’art is a three-day event that spotlights professionals working in the arts & crafts everywhere in France. 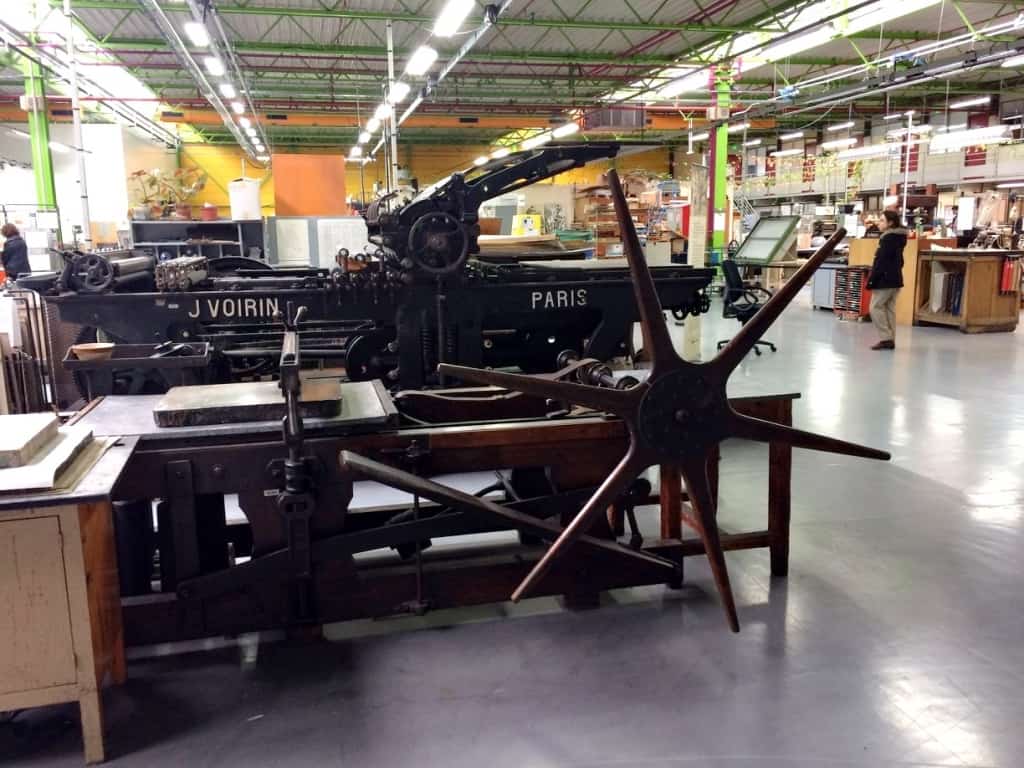 The Atelier du livre d’art et de l’estampe preserves a unique heritage in the world that summarizes the history of the printed book and displays its craft techniques. Being able to visit it felt quite special. In previous centuries, the Imprimerie Nationale was housed in Louvre before moving to the 15th arrondissement of Paris. It currently has a permanent address in Flers-en-Escrebieux, near the Belgian border.

Upon arrival, we were greeted by the director of the Atelier du livre d’art et de l’estampe, Pascal Fulacher, who took us on a journey through its rich history and recent development. Following on from the Imprimeur du Roi pour le Grec (the royal Greek printer) created by king François I in 1538 to publish works of literature, the Imprimerie royale was founded in 1640, by Louis XIII of France at the instigation of Cardinal Richelieu. The combined legacy of its collections of punches and characters, the oldest of which date back to François I, covers the full range of crafts that make up the history of printing: the creation of letters, engraving of punches, type-founding and letterpress and intaglio printing. The collection of more than 500,000 punches is unique in the world and is classified as a historical monument.

The publications executed at the Imprimerie nationale have also played an important role. A particularly prominent example is the Description de l’Egypte published between 1809 and 1828 during the reign of Napoleon I, whose twenty volumes constitute a snapshot of Egypt at the start of the nineteenth century, with diagrams, drawings and maps concerning all aspects and regions of the country. This publication remains an extremely important source of information for Egyptologists. 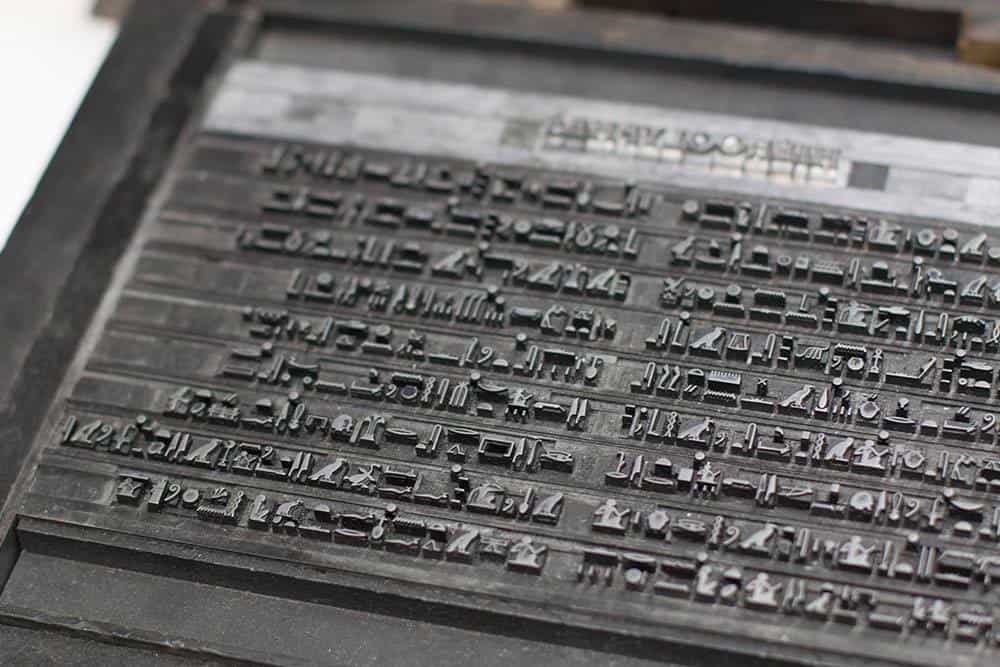 The Atelier also has a strong focus on non-latin types with publications in more than 65 scripts/languages: from hieroglyphs, cuneiform, Chinese and Greek to Arabic (13 styles), Armenian, Cyrillic, Hebrew, Sanskrit, Tibetan, Tuareg, Mayan, etc.

At the end of 19th and the beginning of the 20th century, the printmaking workshops of the Imprimerie nationale welcomed various artists such as Pablo Picasso, Henri Matisse and others who produced lithographs and etchings and who were involved in the production of artist’s books such as Edgar Degas. La Maison Tellier published by Ambroise Vollard, for which the engraver Maurice Potin was challenged to produce a facsimile of a Degas pastel and for which a new font of Grandjean was made to accompany the illustrations. 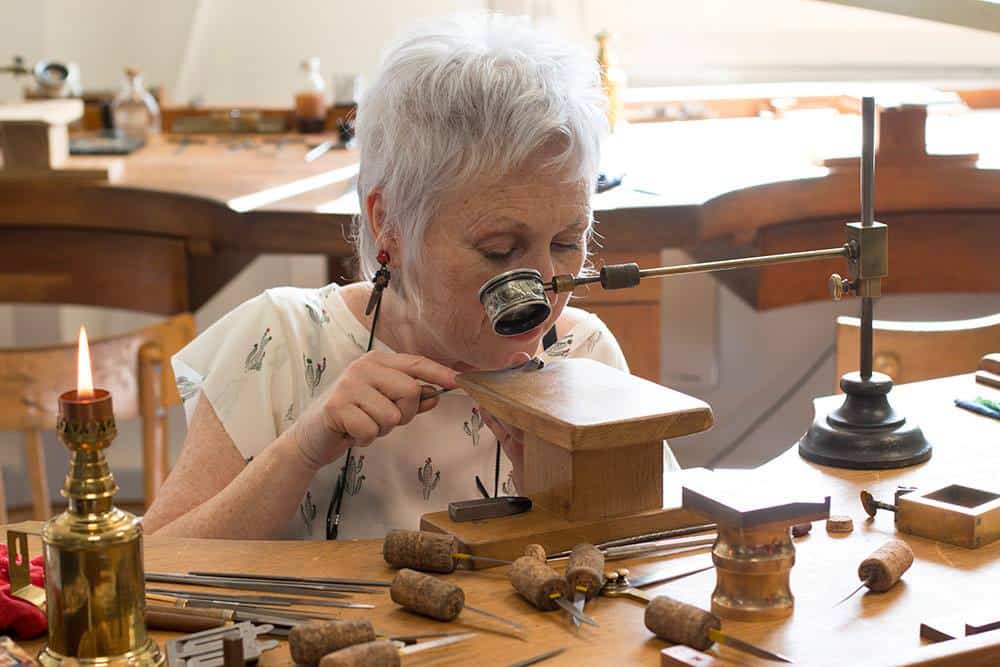 Moving into to the heart of the workshop we met Nelly Gable, who had come to the Imprimerie nationale in 1987 to learn the art of cutting punches for the making of type. She is now responsible for reproducing existing historic punches and for making new ones such as the Euro symbol, or brand punches like the one for Miquel Barcelò, and watches over the engraved heritage of the Cabinet des poinçons (Punch Room). Nelly Gable is not only the one and only female punch-cutter: she is also qualified to teach the craft of punch-cutting. Mme Gable gave us a detailed explanation of the process that is believed to have originated when Johann Gutenberg first used his jeweler’s expertise to cut punches and cast individual types in the mid-fifteenth century. During the guided tour through the Cabinet des poinçons she gave a brief demonstration of the cutting of letter punches, a process requiring considerable craft skill, patience and practice.

The Cabinet des poinçons, the treasure of the Imprimerie nationale, preserves approximately 670 000 items, of which the oldest are the grecs du Roi cut by Claude Garamont for François I. The French Imprimerie nationale is one of the very few institutions to continue employing punch cutters into the twenty-first century, to demonstrate the historic techniques, and to complete the character sets of historic typefaces.

From the mid-nineteenth century, new technologies displaced manual punch-cutting, and the Atelier du livre d’art et de l’estampe is also equipped with several typecasting machines from different periods such as the Typograph, the Monotype or the Linotype. Philippe Mérille, who is in charge of the typecasting department demonstrated the working of the Monotype, a mechanical composition system consisting of two elements, the keyboard on which the text is keyed in and recorded on punched tape, and the casting machine which automatically produces text composed of individual lead types ready to be placed on a printing press.

Currently, the Atelier du livre d’art et de l’estampe focuses on artists books and bibliophile publications and welcomes a new generation of artists in residence to practice the crafts of lithography, etching, etc. Art publishers, bibliophile societies, institutions, and renowned artists regularly call upon the services of the Imprimerie nationale to produce their prints and books. Even more recently, the Atelier has begun to offer introductory tours to discover the various traditional printing crafts, as well as specialized training in punch-cutting and other techniques.

Considered as the oldest printing workshop in the world still in use, the Atelier du livre d’art et de l’estampe embodies the know-how and excellence of the Imprimerie nationale, a modern company resolutely turned towards the future while at the same time balanced between tradition and modernity. 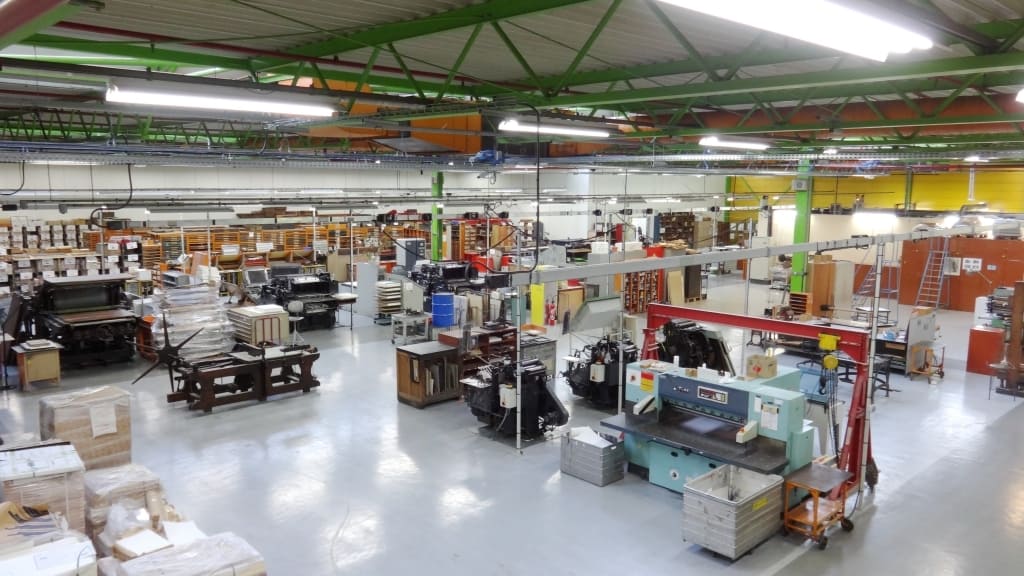 See also: the Facebook photo album of the visit.