Publications / Why do we make printing museums?

Talk given by May Tove Nyrud, subject specialist at IDDIS – The Norwegian Printing Museum and The Norwegian Canning Museum, Stavanger, Norway, at the conference of the Association of European Printing Museums, Why do people make printing museums, held at the Atelier-Musée de l’imprimerie, Malesherbes, France, 5-7 May 2022.

But what is IDDIS? In short: the Norwegian word for label, as in labels for canned goods, is ‘etikett’, which in the local dialect became ‘iddikett’, and shortened to ‘iddis’. So ‘iddis’ – or label – is the common ground for these two museums. The canning industry produced enormous amounts of canned brisling fish which was exported all around the globe, and the local printing industry produced millions of labels every year – in the almost 40,000 varieties that emerged during the decades before fridges and freezers became part of everyday household. The labels were from the beginning produced in the lithography technique; later with offset printing, and Stavanger had the second largest litho printing industry in Norway.

The idea of a printing museum in Stavanger goes back to the 1950s, with the technological shift from hot-metal to phototypesetting and the rise of the third industrial revolution: the computing age. But it was only in the 1980s that the local trade union and the city’s building antiquarian authorities started cooperating in building a collection and financing the Norwegian Printing Museum which opened to the public in 1993. Some of you may have visited when the IADM annual meeting was held there in 2009, with the theme: Do (printing) museums have to be boring? A timely question for any museum that seeks renewal!

Despite the fact that a large part of the printing industry in Stavanger had been based on lithography, the Printing Museum also focused quite a lot on letterpress printing and bookbinding and aimed at a national responsibility for printing history. The exhibition area was around 250 square meters, and it was important to have functioning machines and equipment, to be able to demonstrate the machines and techniques to the public, and to be able to produce letterpress books and pamphlets from sketch to finished product. The Museum’s Volunteers’ Association played a huge part in this activity.

The pre-existing Canning Museum exhibitions were for a large part based on a production line showing the steps involved in producing the canned brisling and some other canned goods. In these steps, the smokehouse with working smoking ovens was (and still is) an important element, where my fellow subject specialist for the Canning Museum who is also a trained smoker smokes brisling about 25 days a year. So both museums were important keepers of different intangible heritages which were important to continue.

In 2006 the Printing Museum became part of the Norwegian so-called ‘museum reform’, which meant that small museums had to merge with, or into, larger institutions to receive state funding, with the result that the Printing Museum became part of what today is Museum Stavanger. Around 2010 it became clear that the Printing Museum could not stay in the building we rented from the Stavanger Municipality. After some research, it turned out that the best option for a new location would be together with the Canning Museum. As the Museum Stavanger organisation decided to move forward with the project of  ‘co-housing’ these two museums, we developed a ‘room program’ describing all the needs for museum functions, and held an architect’s competition based on this program.

One main criteria for the new building was that the two museums should become one, in the sense that we should have one entrance, one ticket, and be physically connected so visitors could visit it as one museum, to experience the two differently themed exhibitions without having to exit one to enter the other. And a huge part of this physical connection was to make a common exhibition to bind the two museums’ themes together, that is: making a lithography exhibition in the area where the two museums meet inside the building. So the question of how to bind together these two museums was simply put: how do we tell the shared history of these two industries in Stavanger?

We decided to put quite an emphasis on the iddis, the label that I started this presentation with. The Printing Museum and the Canning Museum collaborated in working out the themes and sub-themes for this exhibition module – trying to see the iddis label from several angles:

We also wanted to visualize the diversity of labels and other printed matter made with lithography, and show the impact this ephemera had on the local community. It became a visual culture that especially children took part in: collecting the labels, exchanging labels with various values, using them as toys, and even using them as means of payment in games.

On the AEPM website museum finder, you don’t find many pins in Norway (I believe all three are represented here at this conference!?). Kunstprenteverket – the Art Printing Works focuses on making graphic art on a collection of historical printing presses; the Fjeld-Ljom Press Museum tells the story of a local newspaper in its original building with still functioning machines and equipment and a volunteers’ association which makes one newspaper every year. But as far as I can understand, the Norwegian Printing Museum is the only museum in Norway where printing history, media history and the history of technology are merged into a narrative which tells a story of writing and printing through  time, with the aim that a 12-year-old should be able to understand the subjects and the exhibition language, that a cruise ship day visitor should get an overview of the local history, and that a graphic designer should find interesting things to submerge into. The development of technology, the development of society, and the relationship between man and media should be recurring themes throughout the various concepts of the exhibition.

Early in the process, before the exhibition designers entered the process – we also decided to put the Print Shop on the 1st floor and the general printing, media and technology exhibition on the ground floor. The ground floor exhibition is a more or less straightforward museum exhibition. The area is only about 475 square meters, without natural light. We’ve tried to make a narrative without using a traditional timeline, but instead using the main concepts] the written word, the printed word, the printed image and «from paper to screen» as a way of telling about the technological development through the ages. And of course the shared exhibition about lithography in Stavanger where the museums are connected.

We’re well aware that we had to make many choices in which stories to tell in the basis exhibition – we’ve killed hundreds of our favourites – and anyone with a background in the printing industry or graphic design will tell us that we’ve not done enough on their favourite subject. But we’ve tried to tell a ‘holistic’ history to disseminate how printing and media has developed into what we see today – and tried to challenge our visitors to think about how printing and media affects us on an everyday basis and what the future can bring.

In addition we’ve tried to make the exhibition elements as flexible as possible with the lettercase-inspired shelf system that can be interchanged with smaller or larger graphic panels and vitrines for future changes and upgrades of the exhibition themes. It is a basis exhibition, a main exhibition – but never a permanent exhibition. 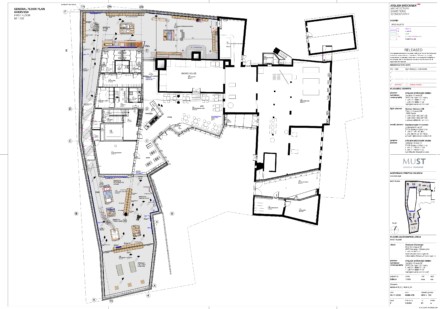 The area for temporary exhibitions is placed at one end of the ground floor – marked with grey. The area is only about 75 square meters, which limits the number of words and exhibition elements and make the ones you end up choosing really count and make an impression on the visitor. The first temporary exhibition pays tribute to a local newspaper cartoonist, Henry Imsland, who drew for Stavanger Aftenblad for nearly 60 years. The next theme will be bookbinding, in connection with the 130th anniversary for the founding of the Bookbinders’ Trade Union in Stavanger. The temporary exhibitions will show for two years, and in the years to come we will seek common themes with the Canning Museum, such as manufacturing of packaging, and looking at diversity in the staff at factories and printing offices. 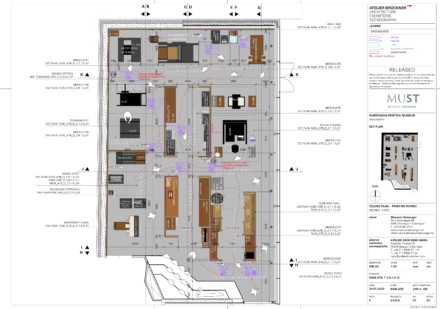 The Print Shop is placed in a separate room on the 1st floor, nearly 200 square meters with large windows letting in daylight. The layout of the Print Shop is a hommage to the work that was done by volunteers and people from the trade union with a special commitment to establishing the museum, in a way that I believe it has kept the spirit of the old museum, with a kind of production line where the machines and the equipment play the lead role, with some texts and images to complement the machines when the volunteers are not present to show and tell.

One other thing that we worked on during several years was the idea of having a position at the museum for a person who should be learning to use the machines and equipment, and being part of keeping the intangible heritage alive. Museum Stavanger applied for state funding of this position on the state budget for 2020, received the funding, and employed our new Museum Technician from January 2021. Since then he’s been learning as much as he can from our slightly elderly volunteers.

Last but not least, a huge part of rethinking the Norwegian Printing Museum, is the educational programs that are being developed. In the ‘old’ museum, the education was largely based on demonstrations of the machines and/or a more general tour of the whole museum. One exception was the program called IDDIS Grand Prix, where high school students learned about label production, and participated in a contest for the best canned food label. This program is still running, as a collaboration between the Canning and the Printing Museum. In addition our Head of Education is developing new education programs about writing, printing and languages; about printing history; and about how freedom of expression and participating in the public has changed with the technological changes in the media. These are aimed at all levels from kindergarten to university students, including groups with special needs students.

This is just a short overview of the background of rethinking the Printing Museum, and you are all very welcome to visit Stavanger and our diverse museum in the future!