Paper given by José Francisco Castro Rodríguezduring the News session at the conference of the Association of European Printing Museums, Safeguarding intangible heritage: passing on printing techniques to future generations, held at the Nationaal Museum van de Speelkaart, Turnhout, Belgium, 23-26 May 2019.

Good morning everyone. First of all, I would like to thank the Association for allowing me to be here in Turnhout and participate in this conference, which is so necessary for all the institutions and colleagues that we are here today. My name is José Francisco Castro, and I am representing Sociedad Cervantina.

Sociedad Cervantina was founded on Don Quixote’s original printing house. The current Imprenta del Quijote started its activity 322 years after the workshop was dismantled. We open our doors to the current world with a firm purpose: to resuscitate the trade of graphic arts from its most traditional origin. Our work focuses on bringing the young public closer to the printing arts, a process immersed, not in a pre-digital system, but a pre-industrial one, where the use of mediation techniques has allowed us to preserve a trade inherited from our ancestors and transmit it to our descendants.

All of us who are here today know the effort involved in this task. The task of keeping alive a way of working and living that has almost completely disappeared from the globalized world of the 21st century. Some of the institutions we represent are fortunate to have original materials of incalculable historical value; old printing centers that have been able to stay alive transforming into museums. Don Quixote’s original printing house disappeared in 1691. The last of the owners of the printing company was widowed and the business was closed, dismantling the entire workshop forever. After that, the building was completely converted into a school for homeless children; little by little it was become a hospital for incurable patients, which was in operation until 1953, the year when Sociedad Cervantina was founded; however, it would not be until 2013, when the current Imprenta del Quijote opened its doors. 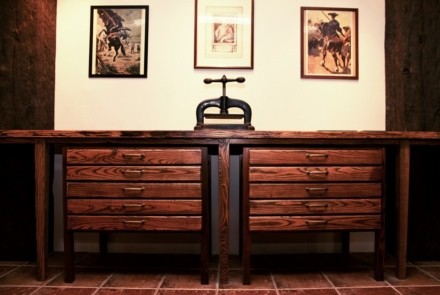 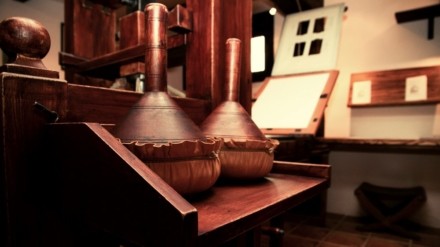 What I am trying to explain is, despite becoming a centennial workshop where great works of Spanish literature of the Golden Age were printed, among them the most important one, the most that has been able to reach our days have been the remains of the building, where Sociedad Cervantina has its headquarters. A few years ago, on the occasion of the fourth centenary of Don Quixote publication, in 2004, Sociedad Cervantina was able to build a functional replica of a printing press of the sixteenth century, following mainly the indications of Diderot & D’alembert’s Encyclopedia, as well as engravings in original books, and the visit and study of the presses preserved at the Plantin-Moretus Museum in Antwerp. However, it would be necessary to wait another ten years to have the necessary infrastructure to start up Imprenta del Quijote as a museum that can be visited.

It is obvious that we do not have the means, neither economic nor material, to place ourselves next to the actual museums focused on the printing press history. For example, at Madrid, we have Imprenta Municipal, a reference museum in Spain on the typographic industry. So ¿what was our way of acting? Take advantage of our weakness and make it our strong point. If we had been the disappeared Don Quixote’s printing house… we would have to be Don Quixote’s printing house again. 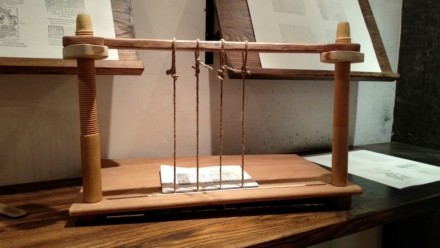 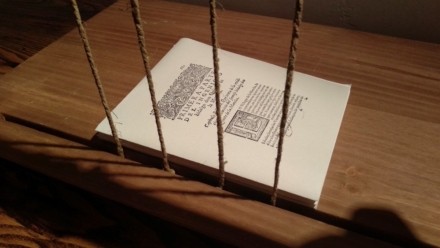 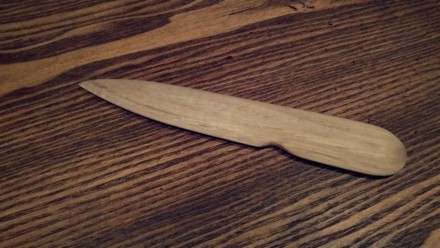 For years, we have proposed a clear task: to become a path between the present and the sixteenth century. To offer an experience as close as possible to the world of graphic arts in its traditional origin, and not so much to the evolution of the printing craft after industrialization. For this, we are doing our best to recreate a workshop closer to the Modern Age than to the Contemporary Age. Go back to the workshop that Miguel de Cervantes could set foot in around 1604.

In this sense, and since finding original tools and materials of more than 400 years is beyond our possibilities, we decided to build our own tools in a completely handmade way. Composing stick, book binding loom, bone folders, hole punching cradle, bookbinding plough, frame for the manufacture of paper… tools that, although not all expressly correspond to the scope of the printing workshop, they complete the experience of the visitor to Imprenta del Quijote. 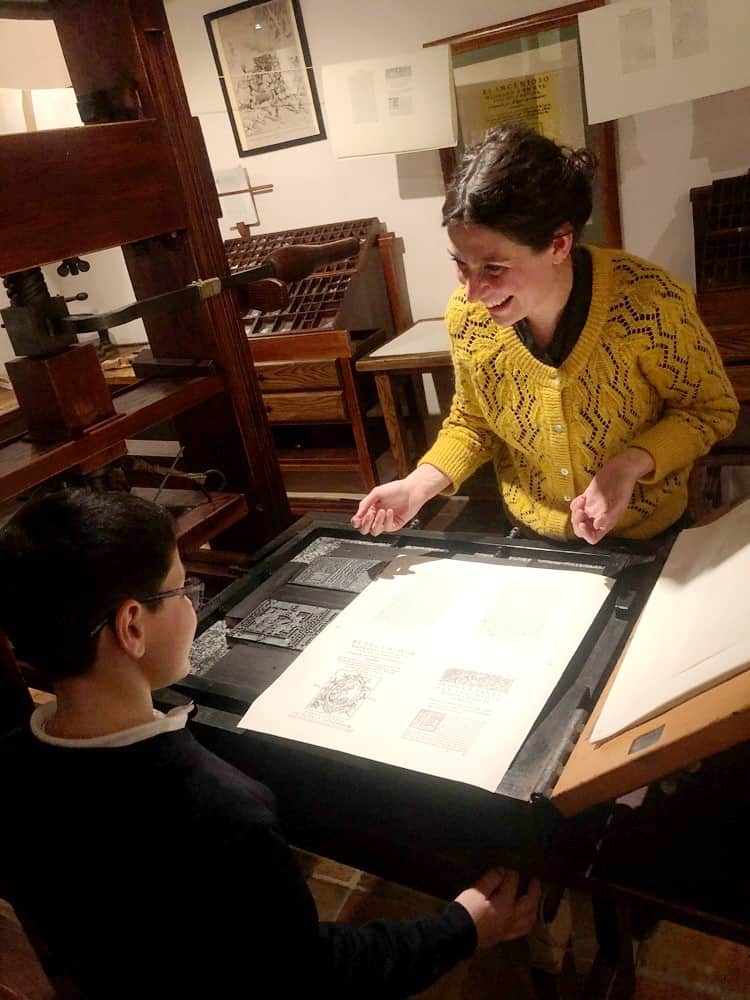 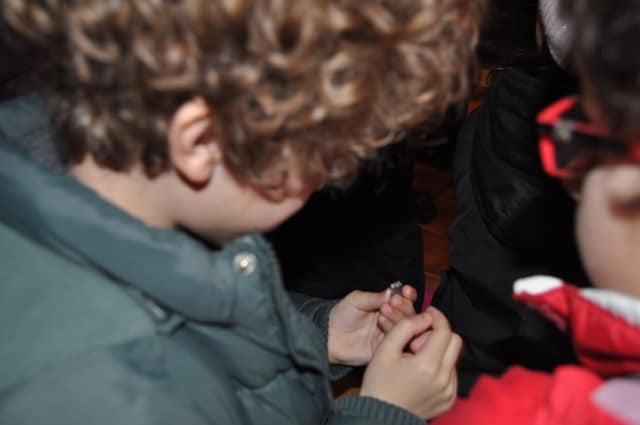 Therefore, Sociedad Cervantina is not a school or a professional training workshop. Its main activity is the dissemination of the work of Miguel de Cervantes, so his audience is of all kinds. It is true that Madrid has been a great printing center during the 20th century. Being an European capital, the cultural production has always been considerable, especially in the publishing world. That is why we are used to being visited by many professionals from the graphic arts world in any of its disciplines (writers, editors, printers…), but our usual audience is precisely the opposite: people who are not specialized in historical subjects or in printing world.

Because of this, mediation is our usual methodology. The visit to Imprenta del Quijote is a guided tour through the editorial world of Miguel de Cervantes. A visit to observe, listen and manipulate. Something essential especially for our younger visitors, most of them have not seen a typewriter in their lives and don’t know what is the soot with which the ink was made.

And, in the middle of all this way of spreading knowledge, ¿what have we discovered that works exceptionally well with the public, and more with the little ones? Theater. 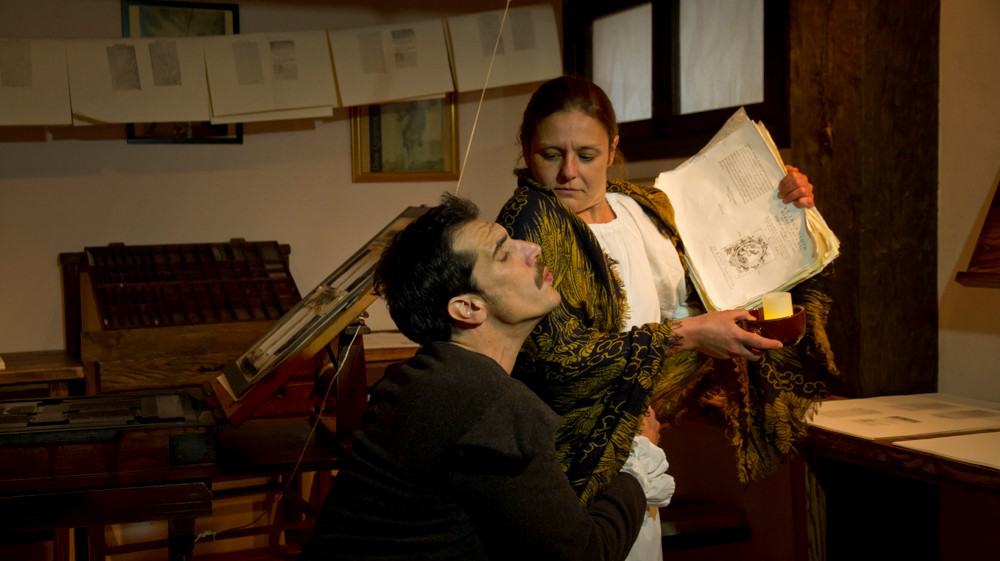 Sociedad Cervantina has its own theater company, Teatro de Cámara Cervantes (Cervantes Chamber Theater). And we wanted to try to unite both fronts in one, achieving excellent results. We all share the love for history, we would not be here if it were not so. And we also know that there are few things as good as a good story. So, ¿what a better way to convey this legacy than with one of those good stories? If imprenta del Quijote can not keep a trade alive by training new professional craftsmen, at least it will do everything possible to keep its memory alive by making known a world that seemed to be on the way to oblivion, but some of us are striving to continue preserving, and thus be able to transmit it to our descendants.

So, if any of you are in Madrid, I invite you to come and visit Sociedad Cervantina and Imprenta del Quijote. It is a modest place, but very special for us, and we are very proud to show it to the world.