Secret writing in the House of the Book

This summer the Museum Meermanno/Huis van het boek (House of the Book) is organising a family exhibition about ‘secret writing’. From 10 July to 10 October, visitors will explore a maze with exciting assignments concerning mysterious texts from various cultures. Tablets from 2000 BC, papyrus scrolls from the beginning of the era, Inca quipu from 1500, 17th-century ingeniously folded letters and encrypted messages from the Enigma cipher machine are waiting to be deciphered. Also on display are enigmatic old and modern books from the House of Book’s collections. In this exhibition, parents and children learn in a playful manner about the culture of writing, riddles and communication.

Secret scripts in all shapes and sizes

Some scripts are ‘dead scripts’ from times long past: the ancient Egyptians wrote hieroglyphics in stone. Six centuries ago, the Incas used a script that they painted on lima beans, in addition to the string and button language of the so-called quipu. Hobo signs were a secret language of and for vagrants. And in the 18th century, ladies from high society communicated with their lovers using a secret fan language.

Artists are eager to use secret writing: writers, such as Edgar Allan Poe and Arthur Conan Doyle (of the Sherlock Holmes stories), used it in their stories. Also modern book artists, like Irma Boom, Sjoerd Hofstra and Candace Hicks, show surprising techniques to hide messages. 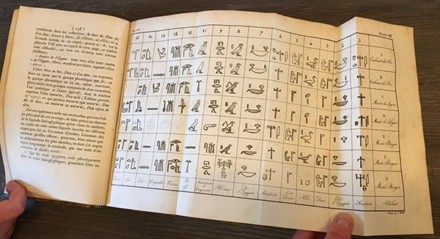 A labyrinth full of secrets

At the end of the labyrinth full of assignments, there is a secret writing workshop where everyone can write their own secret letter and post it on the spot. The denouement of the quest can be found in a dark room where all the secret scripts come together in UV light. The exhibition is suitable for children and adults from 7 years of age. House of the Book
Prinsessegracht 31
The Hague
Netherlands

Meeting information
10 July to 10 October
House of the Book, The Hague, Netherlands