The annual AEPM conference will be held at the Nederlands Steendrukmuseum (Dutch lithography Museum) in Valkenswaard (Netherlands) from 3-5 November 2016.

It is being jointly organised with the IADM (Internationaler Arbeitskreis für Druck- und Mediengeschichte).

The theme of the conference is:

From stone to chip

Lithography. Few people know what it is, and even fewer know how it works. Yet we are permanently surrounded by documents and objects printed by this long-established process. Introduced in the early years of the 19th century, lithography mutated in the early 20th century to become offset lithography which went on to replace letterpress as the principal industrial printing process.

Despite its now venerable age and its current position as the predominant printing process, lithography occupies a relatively minor position in the literature of printing history as well as in most printing museums. Why so? Should it be more present in printing museums? And if so, what are the perspectives for research on the history of lithography and for the exhibition and mediation of the machines and products of lithography aAEPMnd the major role which this technique has played in the development of graphic communications since the beginning of the 19th century?

The AEPM and IADM are calling for papers for a joint conference which will be held in the superb Nederlands Steendrukmuseum in Valkenswaard (NL) in November 2016. The conference will address various aspects of the history of lithography from Senefelder to the present day, and examine ways in which this major artistic and industrial process might occupy a more important place in printing museums.

Communications are invited on themes such as:

Proposals dealing with the history of lithography within the context of the broader issues raised by the conservation and mediation of modern communications technologies would also be welcome.

The list of suggested themes is, of course, neither exhaustive nor exclusive.

It is hoped that the conference will also provide an opportunity to bring together museums, people and ideas with a view to discussing the possibility of producing a travelling exhibition about lithography in 2018, on the anniversary of the publication of Aloys Senefelder’s manual of lithography.

Abstracts of no longer than 250 words should be submitted along with a brief biography to:
muench@deutsches-zeitungsmuseum.de and chair@aepm.eu
by 15 April 2016.

Speakers will be allocated 20 minutes in which to present their papers.

The conference is supported by the Association of European printing museums (AEPM), the Internationaler Arbeitskreis für Druck- und Mediengeschichte (IADM) and Nederlands Steendrukmuseum. 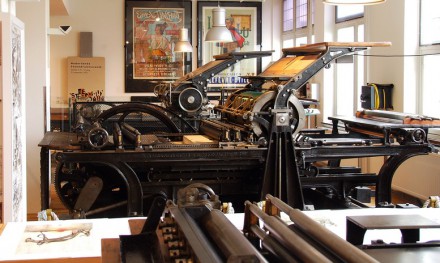 General view of the Nederlands Steendrukmuseum