The 2020 edition of the AEPM’s annual conference is being hosted by the Klingspor Museum and the Haus des Statdgeschichte in Offenbach an Main (Germany).

International book art, typography and calligraphy of the 20th and 21st centuries 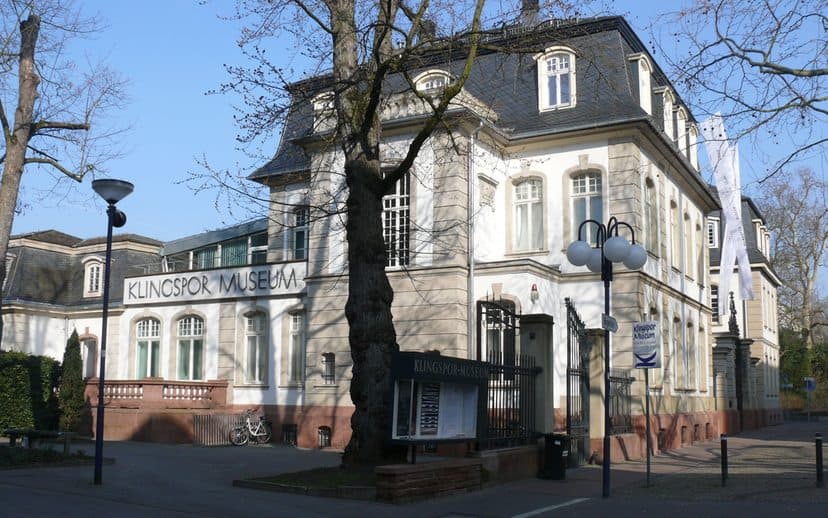 The fascination with the visual and symbolic expression of the spoken word as type, illustration and their varioous combinations has always held a central position in the fine arts. Its continued importance in the 20th and 21st centuries is the focus of the Klingspor Museum.

The Museum was founded in 1953, based upon the private collection of Dr. Karl Klingspor (1868-1950) who, together with his brother Wilhelm, had run the type foundry Gebr. Klingspor in Offenbach in the first half of the 20th century. Still under its original name Rudhard, it had been taken over by the brothers in 1892 and led to an astonishing bloom, culturally and, for many years, also economically.

Recognized artists of the turn of the century designed a distinguished font repertoire which the foundry manufactured and distributed worldwide. The foundry Gebr. Klingspor was foremost notably in the so called fractur fonts, revigorating the tradition of the Textura, Schwabacher and Gothic Fractur.

With Heinrich Vogeler, Otto Eckmann and Peter Behrens it was able to create fonts and book ornament, visualizing the epochal transition between historism, Art Nouveau and New Objectivity and demonstrating this age’s commitment to forging a distinct German cultural identity through the character and appearance of type. In 1906 Rudolf Koch, born in Nuremberg in 1876 and formerly working in Leipzig, joined the Offenbach foundry. More than twenty type fonts were created by his hand in addition to a huge range of calligraphic work. Books and single pages are inscribed with text, especially from the fields of religion and nature. Besides the calligraphy by Koch one should also mention that of Rudo Speman which was given as an almost complete estate to the Museum’s founding inventory by the family of the young-deceased artist.

Rudo Spemann was a student of Fritz Helmut Ehmcke and also of Ernst Schneidler and was called to Leipzig as a teacher by Walter Tiemann, whose Januspresse exemplarily influenced the early hand press printing in Germany. Thus he stood in closest proximity to the protagonists of typographical art, who are all present in the Klingspor Museum with large work portfolios. Herbert Post, Jan Tschichold, Adrian Frutiger are only a few other names who bear witness to type design’s creative productivity and have likewise found a home in the Klingspor Museum.

The studio collective founded in 1921 by Rudolf Koch at the Werkkunstschule set itself the task of creating not only work of script but also of textile and metal arts, reaching back to Medieval manufacture and its Gothic form language – here influenced strongly by William Morris and the calligrapher Edward Johnston. The unique calligraphic tapestries with texts from, especially, the Old Testament point to Koch’s Christian mindset, but also to his friendship with Siegfried Guggenheim. In Offenbach since 1901, and longstanding head of the Jewish community, he commissioned Koch and his team with book works and implements used for the Seder celebration. In part as a gift, in part in commission, Guggenheim’s unique collection of manuscripts and liturgical implements was thus created. Included are Koch’s calligraphic treatise Vom Judentum (1915), the important Offenbach Haggadah with hand-colored wood-cuts by Fritz Kredel (1927) and the richly illuminated manuscript of the Psalter (1922-29).

The Klingspor Museum owns type specimens and catalogs of many fonts by almost all important designers up to the end of hot metal type manufacture. All of type design’s significant achievements, for example by Paul Renner, Georg Trump, Jan Tschichold, Hermann Zapf or Adrian Frutiger are documented in the collection.

The Museum is endowed wealth of book art. Based upon the press printings, English and German, collected by Karl Klingspor and assembled into a library with its very own individual character by Ignatz Wiemeler, one of the most creative bookbinders of his time, these 84 volumes give us an idea of the understanding of form which developed into the ornamental reduction of the early 20th century.

Klingspor’s collection lays out all areas of artistic expression through the book. An example for book illustration is given by Umbra Vitae, published 1924 by the Kurt-Wolff-Verlag, embellished with wood-cuts by Ernst Ludwig Kirchner to Georg Heym’s poems. Such illustrated books, painters’ books and especially the artists’ book have been representatively collected since the late 1970’s. Thus so many illustrious names of art history are connected to the Museum, making very clear how much their book creations were conducive to their work. Books by Kate Steinitz, Picasso and Miró come alive through the image, while works by Matisse and Dubuffet incorporate the qualities of the calligraphic in very different ways. Max Ernst’s Maximiliana (1964) shows how a painter sees a book work at the focus of his self-conception and stages imagery as well as type ornamentation with extreme individualism; especially in collaboration with such an experiment-loving typographer like Iliazd (Ilya Zdanévitch).

A few years ago we were able to acquire the portfolio Metapher Zahl (1985-89), a multifaceted work of concrete poetry. Rupprecht Geiger’s highly luminous serigraphs of the numbers 0-9 are accompanied by interpretations of one number each by such renowned artists as Franz Mon, Eugen Gomringer, Tim Ulrichs or Emmett Williams.

Contemporary book art is based on the radical change from hot type to film and photo setting, finally to the computer world. Having become obsolete in the workaday life, hot and wooden type were taken up by artists and creatively mounted to type images interpreting literature. Like only a few other collections in Germany, the Klingspor Museums overviews the development of hand press printing and the artists’ book, as it has been progressing mainly since the 1980’s.

The estate of Wilhem Neufeld is exemplary for the way the artist understands and realizes the book as a form of expression all its own. To this day the artists’ book has been developing and remains the focus of new acquisitions.

But script art outside of the book also has its place. Graffiti, having long since migrated from the street to the canvas and plate, is a vibrant area proving the vitality of the handwritten. This is in contrast to typography in graphic design. Several valuable works by, among others, Peter Behrens, Fritz Helmut Ehmcke or the Wiener Werkstätten form the old stock of the poster collection. This has grown to include international masterpieces by Pentagram (New York, London, San Francisco, Austin, Berlin) or by Gerard Paris-Clavel, but also such famous designers as Hans Hillmann, Günther Kieser, Holger Matthies, Gunter Rambow, Christian Chruxin and Uwe Loesch (Designer of this museums logotype). His often prized poster for the 9.Triennial for Form and Content, held jointly by the Frankfurt Museum for Applied Arts and the Museum of Arts and Design New York, stands for typography on new paths; it also stands for the Museum’s aspiration keep establishing national and international relationships. An integral part of the encounter between the Museum and the public is the library with its approx. 78,000 items of book and script art. These contain estates, collections and work complexes of important artists, for example Frans Masereel, Hendrik Werkman, Josef Hegenbarth, Werner Klemke, Alfred Finsterer or Paul Stein. In the library the visitor and beholder fast becomes a user who, in the tangible handling of the rare books, can feel their essence. Exhibitions and library act as complimentary ways to experience the Museum’s range. Lectures as well as the fixed events Book of the Month and Extra am Mittwoch explain the collections to the visitor. Publications in collaboration with contemporary book artists set accents of modern book design. 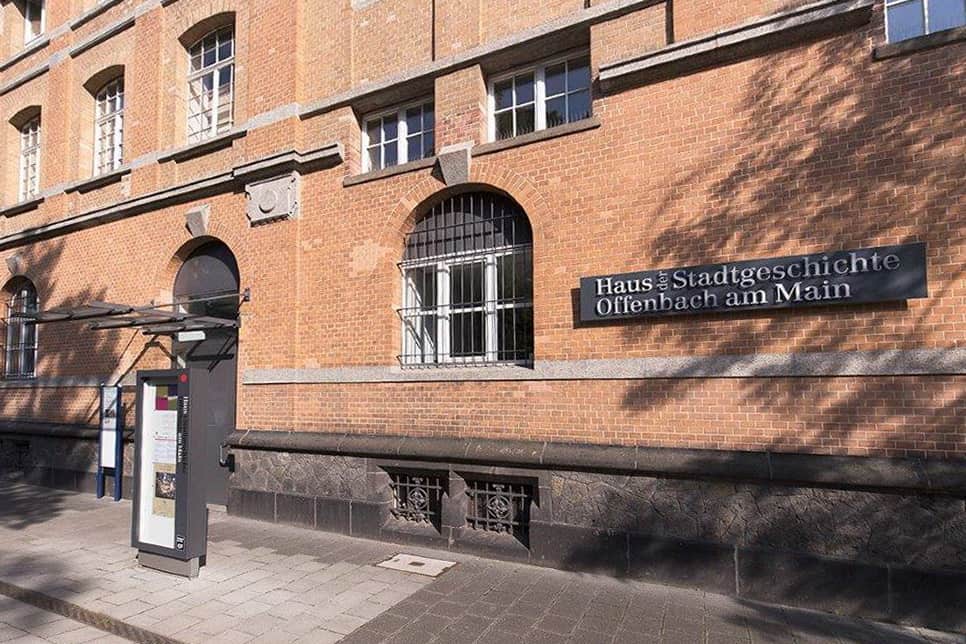 The Haus de Stadtgeschichte (Offenbach local history museum) was created by merging the city museum and archive and opened its doors to the public in 2004. In close cooperation with the museum director, a working group from the HfG Offenbach, led by Prof. Siglinde Spanihel and Prof. Dieter Lincke, developed and implemented one of the most modern exhibition concepts in the Rhine-Main area.

The successful presentation covers a period of almost 10,000 years, beginning with the prehistory and early history, which, after the Middle Ages and modern times, ends with a view of the future. The museum takes into account important aspects that are also noteworthy across regions, such as the history of the Huguenots and Jews in Offenbach. In general, this self-confident portrayal of Offenbach’s history raises fundamental questions about the historical networking of the Rhine-Main region.

In addition to the permanent collection, the exhibition space offers the opportunity to visit special exhibitions of various types at regular intervals.

In addition, the Museum opened its graphic collection / modern art in 2009, which contains paintings, graphics and sculptures by Offenbach artists. The works of the first abstract artist Erich Martin are exhibited there publicly.

We look forward to your visit and are always available for questions!

This post is also available in: French, Spanish, German, Italian