Registration is now open for the AEPM’s annual conference 2021.

Printing in Offenbach: the art of a craft and the craft in the art

The event is being hosted by the Klingspor Museum and the Offenbach Local History Museum (Haus der Stadtgeschichte). Exceptionally this year it is being offered as a Zoom conference. The talks will be livestreamed from Offenbach, complemented by various recorded visits to local places of printing and heritage interest.

The conference takes up the programme that was planned for last year but which had to be cancelled because of the Covid-19 pandemic.

The full updated programme will be announced mid-March.

Participation is free of charge, though a donation to the host museums to help defray costs will be gladly accepted.

If you would like to take part in the conference please contact Dr. Dorothee Ader at the Klingspor Museum: dorothee.ader@offenbach.de. You will receive the access link and necessary details in good time before the conference.

Why Offenbach am Main?

Many events, including last year’s AEPM conference, have faltered since the beginning of the pandemic both within the printing industry and among the many organisations dedicated to print culture. This year the AEPM is determined to place the spotlight firmly on printing heritage with its annual conference despite the fact that it will not be possible to fulfil its role completely by bringing its members together in one place,as it usually does to discuss and celebrate printing and graphic heritage. 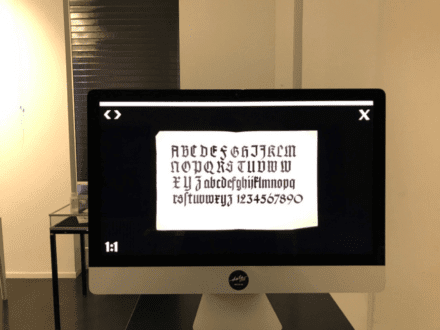 The conference also wants to set an example by looking at how the City of Offenbach am Main is redefining itself as a place of printing on the basis of its long tradition in the field of the graphic arts, and at how local citizens and cultural policy-makers have come to see illustrious printing personalities such as Johann André and Alois Senefelder (lithography) on the one hand and Karl Klingspor (type founding) on the other as two complementary facets of a single historical narrative – that of the City’s contribution to the development of visual communication.

It will also look at how a lively interplay between Offenbach’s museums with their rich collections of prints and the prestigious International Senefelder Foundation has made possible the recent launch of a new printing workshop whose purpose is to make traditional printing techniques accessible in Offenbach for both professionals and amateurs, young and old. 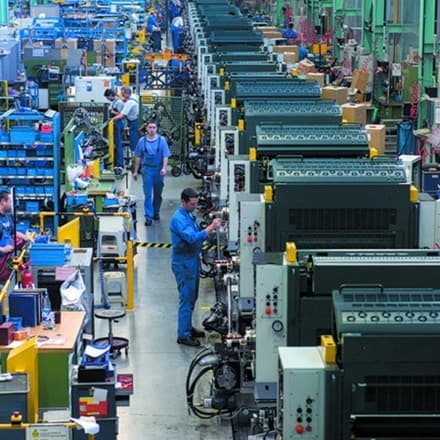 In this context, the encounter with the renowned graphic arts manufacturer ManRoland Sheetfed which had originally been planned as part of last year’s conference is even more topical because the comany celebrates its 150th anniversary this year. Thus, it is not about nostalgia for a once great but discarded craft, but rather about the evolution of a technology that continues to play a vital role in the contemporary economy. 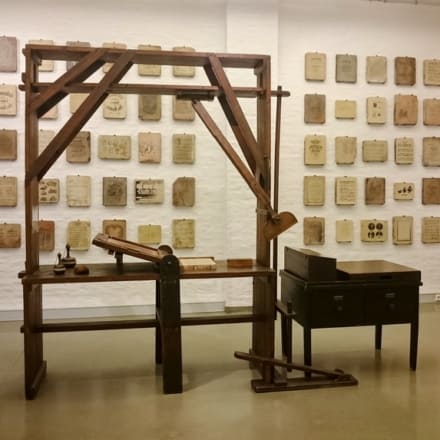 For all these reasons, it is clear that Offenbach is a perfect place for the AEPM to meet, for it offers an ideal backdrop to our discussions of the many aspects of the history of printing and its continuing role in modern society – discussions which will turn around two main themes this year. The first is the technology of the printing press, which will be encountered first hand in the form of the reconstruction of Senefelder’s original ‘pole press’ for lithographic printing which is conserved in the Haus der Stadtgeschichte, and the Manroland presses built in Offenbach  that have had a significant influence on sheet-fed offset printing worldwide. The second theme is that of the artists working in print media and the important patrons and producers who have promoted the work of these artists. Both themes will be displayed and discussed at the conference with speakers from Poland, Italy, France and Germany evoking a wide variety of related topics.

Unfortunately it will not be possible to bring everyone to Offenbach but, hopefully, it will be possible at least to bring the speakers together at the Klingspor Museum, along with the staff of the host museums, for the livestreamed talks and discussions which we hope will reach as broad an audience as possible online via the websites of the AEPM and the Offenbach museums.

Topics, speakers and an brief outline of the programme

There will not be one guiding thread through the conference, but a mosaic of ‘gems’.

Eva Hanebutt-Benz, with all the experience she brings as a researcher and long-time director of the Gutenberg Museum in Mainz, will give an overview of printing along the rivers Rhine and Main. A most noble setting for the printing town of Offenbach!

Martyn Kramek will explore Łódź (Poland) as a silent source of type founding and the book arts, a fitting parallel to Offenbach.

Walter Raffelli, a trained lithographer, and his friend Anton Würth are experienced practitioners of the technique of printing from engraved stone. Anton Würth has grown out of this collaboration to become one of the leading artists of engraving. Walter Raffaelli, for his part, works in Rimini (Italy) as a publisher specialised in contemporary poetry and is committed to the exquisite printing of his publications.

Francoise Despalles and Johannes Strugalla and their publishing house Despalles éditions (Paris, Mainz) have over the years produced a wealth of beautifully printed books in which the evolution of the media landscape is just as apparent as the premise that what is to be printed is what claims validity as a message. This is an aspect that deserves attention above and beyond the aesthetic aspects of printing since Gutenberg.

The contribution of Joseph Belletante (Museum of printing and graphic communication, Lyon) is also aimed in this direction and deals with several eminent protagonists of graphic design, not only in his home cpountry, France, but also in Poland which was for so long the Mecca of illustration and poster design. Pierre Bernard, Gérard Paris-Clavel and other companions came together to form Grapus, later Ne Pas Plier, and pursued the socio-political dimension of this strikingly appealing printed matter.

Christina Wildgrube, based in Leipzig, speaks in quieter, decidedly fine-lined tones. This young artist studied at the renowned Academy of Book Art and Graphic Arts in Leipzig and immediately caused a sensation with her prints which she designed and printed using materials from the printer’s type case. But what might sound like nostalgia in fact turns out to be an entirely contemporary visual language.

On Saturday Uta Schneider and Ulrike Stoltz, the two artists who co-founded Unicat T and later USUS, along with Dominik Gussmann the workshop manager, will take us away from the lectern of the previous day’s talks and into the Museums’ new printing workshop. They are among the most important personalities working across the entire diversity of printing in and outside the book, and can report on this field on the basis of the many talks which they have given at universities, the Stiftung Buchkunst (Book Arts Foundation), etc.

The Saturday programme will provde encounters with the techniques and art of printing in and around Offenbach in museums as well as in the printing studios of various artists (including Anja Harms, Eberhard Müller-Fries, Anton Würth). In addition to the artistic aspect, mediation and education will also play an important role. Over the years, the museums in Offenbach have developed a sustainable methodology for introducing young people to the world of printing. A feature of museums’ activity which is perhaps the most important in the long run – especially for those of us who work in the fields of printing and the graphic arts.

And last but not least…

Two works of 20th century print art will also accompany our meeting. One is by Marc Chagall, the other by Joan Miró, and both are very rarely seen. 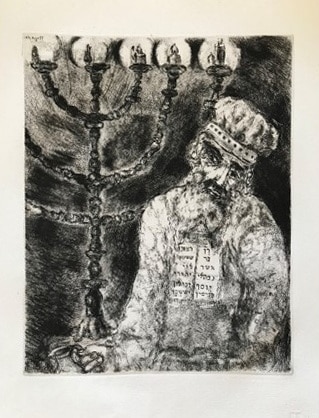 The lecture room in the Haus der Stadtgeschichte will be decorated with a collection of around 40 etchings. which come from the Bible which Marc Chagall (1887-1985) began at the end of the 1920s as a commission for Ambroise Vollard. After Vollard’s death, and thanks to the efforts of the eminently active publisher Tériade, the series was completed by Chagall in 1957 and then printed. The early etchings of Chagall have an enormous timbre and are among the most authentic that the art of the 20th century has produced on the narrative material of the Bible.

Makemono is the title of a transverse scroll, ten meters long, created by the Spanish artist Joan Miró. Executed as a lithograph, with individual passages added in woodcut, the extreme format offered Miró a unique terrain for unfolding the quasi-metabolic features of his language of form and color in never-ending imaginative abundance. On the occasion of the AEPM conference, the roll will be given to the Klingspor Museum by its owner as a permanent loan.

And a final word of thanks…

The City of Offenbach am Main and its museums would like to thank the AEPM for giving them the opportunity to host this important event, and thank all those who are working to make it a success.

This post is also available in: French, Spanish, German